Mae's First Trip to the University 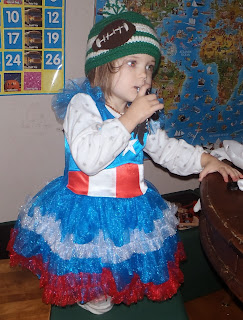 I just wanted to get in a quick post.

Maggie and I went to her first round of testing at the local university.

She loves going to these things.

Grown ups bring out all these toys for her to play with and give her snacks and tell her how cute she is.  She practically drags me to the car when I tell her it's time to go.

Today she was retaking the ADOS.  That's the autism diagnostic test that we took last month.  The university needs it again, at the start of the study, and I didn't mind doing it, since Mae seems to enjoy the evaluations.  Besides, with the diet changes I was curious to see the difference between this month and last month.

And it was amazing.  Last time when they gave her a frog toy and showed her how to make it hop she grabbed the frog and chewed on its leg.  Today she grabbed the frog, made it hop four times while saying "hop, hop, hop" and then got down and started pretending to be a frog hopping next to it.

At the last test she had several drop-to-the-floor-kicking-and-screaming tantrums.  Today she got upset a few times when she'd have to move on to a new part of the test and we'd put a toy away to get her to pay attention to what they were doing in the new section, but other than that she was pretty calm.

We got started on another portion of testing after finishing the ADOS that lets us know her age skill level in various areas.  One of the first things to do was a puzzle.  With Maggie puzzles can be hit and miss.  Sometimes she loves them, sometimes she won't have anything to do with them.  The last two evaluations at her ABA place she refused to do puzzles.  Today she picked up the puzzle and slammed the pieces into place and then took it apart and did it over and over again.  A piece was missing that was shaped like a square and so she found a block (during another part of testing) and brought it over and put it in the square spot where it actually did fit.

Last time when we left she was screaming hysterically and trying to throw herself on the ground.  Today, she showed the lady doing the testing her red boots (we were talking about shoes) and then looked her in the eye and said "bye!"

So that's the latest.  Today was the first in four two hour testing sessions at the university.  It was also the day we started taurine after a week of digestive enzymes. And honestly, with the strides she's made lately, I can't wait to see what she does next.

I'm feeling very blessed.  I could not have dreamed we'd see any changes this quickly.  She just keeps amazing me.
Posted by Cammie Diane at 1:00 PM