The Day that Just Wouldn't End 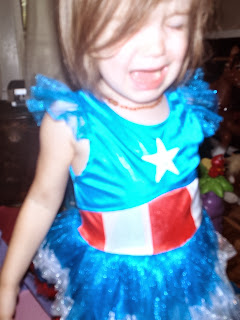 I'm pretty sure that today we were locked in an epic battle and their aim was to wear me down to the point where I would just give in and lay down and let them run wild while shoveling candy into their little sugar deprived mouths.  They were really that wild.  Maybe they sensed that I was not quite back at full strength from the flu and they decided to take serious advantage, or maybe they made some secret pact the other day to all lose their minds together on Tuesday, but whatever it was... It was extreme.

It started at 4 am when Maggie woke up ready to rumble.  Then she made sure that we were all awake.

Then I wrestled Maggie into clothes so that we could go to part two of her ABA evaluation where I yawned about fifty times and could barely keep my eyes open (I'm pretty sure the benadryl from yesterday hadn't worn off yet) and had thoughts like: This kid has been seriously holding out on us... or the diet is really, really working.  One or the other.

Because today Maggie said between thirty and forty words new words.  They weren't huge words some were saying things like "oink" or "moo" when asked what a pig or cow says.  Others were short words like "ball" and "box." But since she had all of ten words about a month ago when we first went in and she would use maybe two a day, and none at all for days or weeks at a time, that's a huge change.

After about an hour and a half of testing we headed home and I tried to keep Maggie from stealing Sadie's math book and writing worksheets, because even if I make the exact same sheets for Mae, her sister's worksheets are just so much more appealing.

At home Patrick was just "patching around" (his sister's words... she calls him "Patch" and says "Patch is just patching around" which makes him grin from ear to ear because apparently he loves his nickname), although he's been exceptionally grumpy of late, courtesy of his two brand new teeth.

At one point I overheard Sadie in another room sternly tell Patrick "no" and came in to find that she'd been attempting to teach him how to walk (force him to walk?) and he apparently wasn't doing it right...

Finally Maggie fell asleep clutching a silicone candy making mold (little robots) in the middle of the living room, while Patch solidly refused to take a nap at all and woke up nine times after falling asleep when bedtime finally rolled around.

Oh and while going through an old box of clothes for sewing inspiration Sadie spotted one of my prom dresses and proceeded to wear it around the house for the rest of the day.

However, I did get something done (kind of).  I decided that we seriously needed to downsize the toys that are out in the house and so I put about 2/3 of them away in separate bins with a plan to rotate the much more manageable number out.  The toy of the moment is ponies, per Sadie's request.

Then Maggie woke up and spent three hours trying to convince me that it was morning and that there was no way she was going to be going to bed... which is why I'm only just getting around to writing this post now.

Still, I have to say, as exhausted as I am at this moment, and as long as today has felt, I am struck by the fact that days like this are few and far between and that most of our days seem to fly by, even when we're in the midst of them...

Now to go upstairs.  I hear a baby crying...  I really hope we're not about to have a disagreement about whether or not it's morning right now... because it's not.
Posted by Cammie Diane at 10:20 PM

Email ThisBlogThis!Share to TwitterShare to FacebookShare to Pinterest
Labels: Autism, day to day