Week Ending: Autumn! And Introducing the Newest Members of Our Family...

I have been struggling alone with the flu for about a week now.  It seems to be letting up and thankfully the kids weren't hit hard.  I definitely know who the weakest link in the immunity department in our house is... if everyone else gets sick for twenty four hours I'm looking at a week... If they get sick for three days I'm looking at a month...  And I'll admit this weekend, when I was at the lowest point I kept thinking:  Oh look! I'm sick just in time to celebrate the anniversary of those five days and four nights with infectious disease in the hospital last year!

That meant this weekend I was torn between wanting to stay inside and curl up under a blanket on the couch, and wanting to get outside because curling up under a blanket isn't all that restful when there are three little people climbing on you, one of whom is clamoring to nurse every ten minutes or so.

So we went out and did outdoor things away from other people... And I relied heavily on my inhaler.

But that wasn't the very beginning of our weekend.  Sadie and I actually kicked the weekend off by waiting until everyone had gone to bed and ordering cheese free pizza.  I even let her stay up until nine and we watched about a half dozen episodes of My Little Pony curled up on the couch together.

This is our "goodnight-babies-go-to-bed" secret.  And that girl?  She can put away a medium pizza by herself.  I'm pretty sure she has a hollow leg since she's pretty such a little string bean: 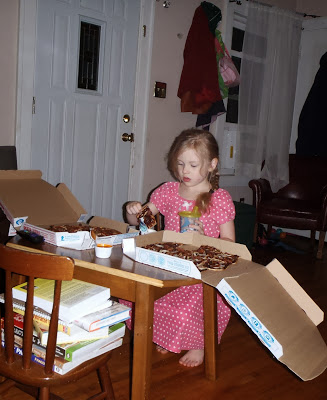 Saturday morning Sadie had her last swim lesson class and then we headed over to ballet.  Then we let Daddy sleep for a couple hours since he'd worked until morning again, before we all headed to the park so that the kids could get their wiggles out: 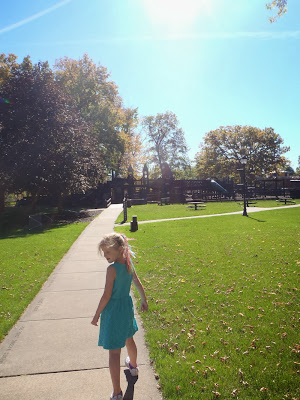 I love autumn.  I just keep saying it over and over again in my head.  It is my favorite of all the seasons. 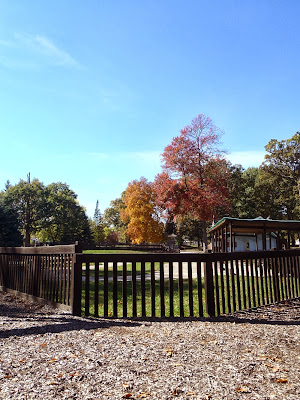 The kids had the playground to themselves for most of the time: 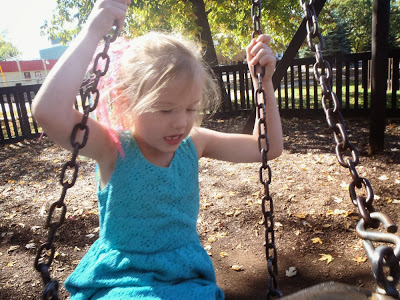 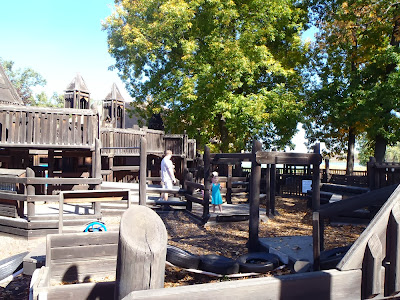 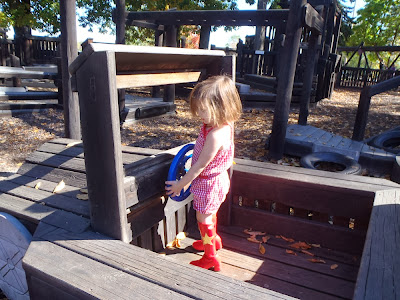 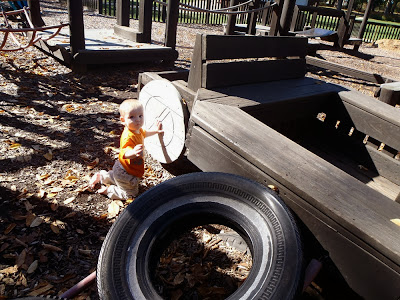 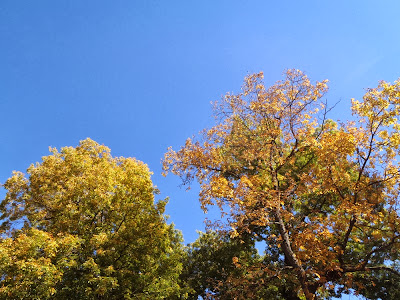 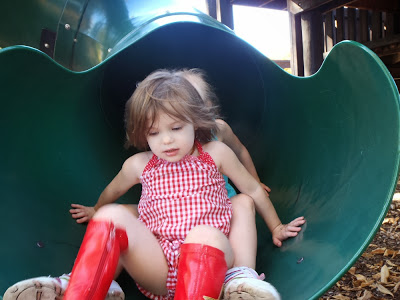 Patrick's looking less and less like a baby and more and more like a little boy every single day.  Can you believe it's less than a month until his birthday? 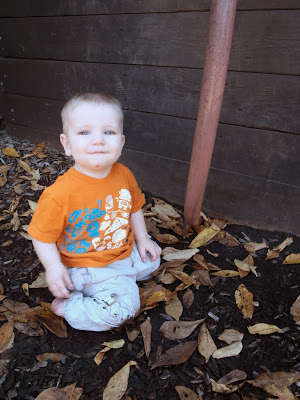 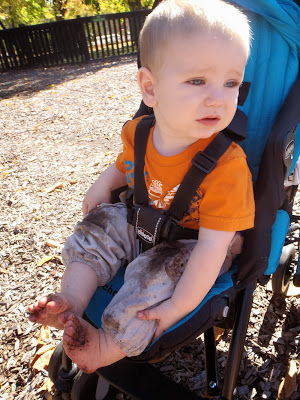 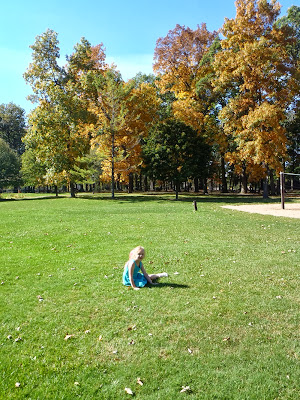 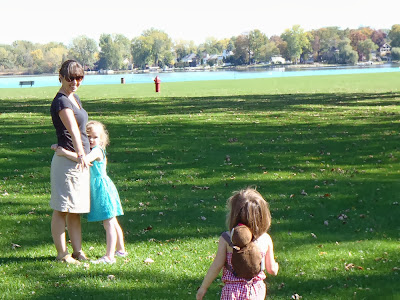 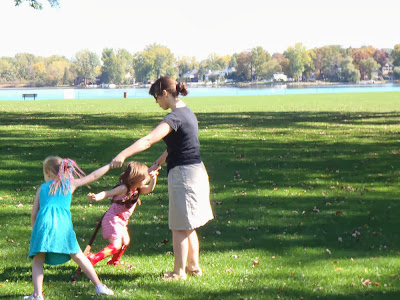 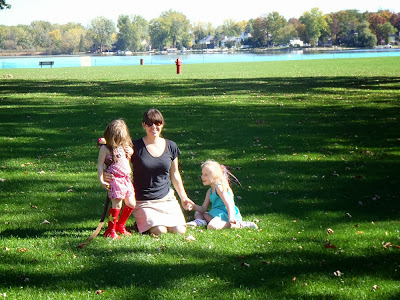 This was during a debate about the appropriateness of wearing that shirt around Michigan at this moment that began after another Dad who was arriving at the playground when we were leaving gave him the stink eye and I then realized that the series with the Tiger's was beginning that very night: 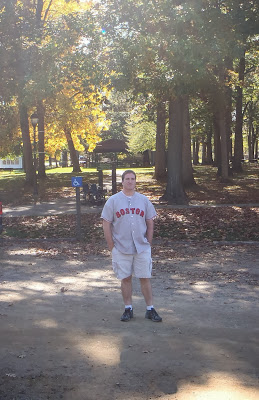 On Saturday we swung by a local corn maze and proceeded to get very, very lost.

The kids thought it was awesome: 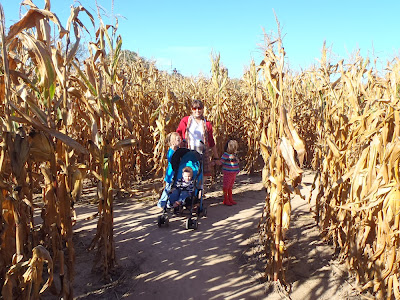 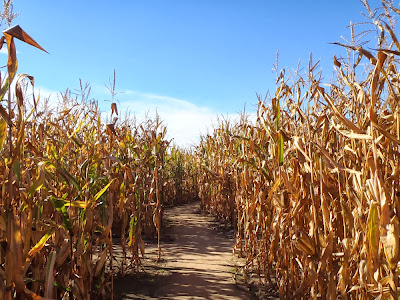 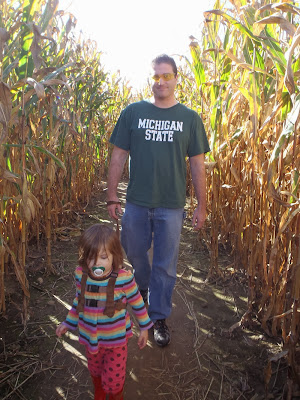 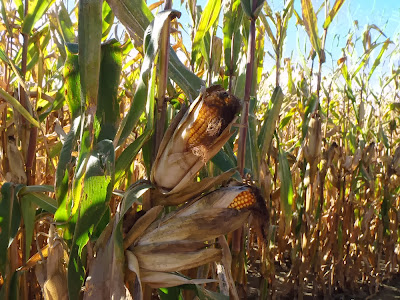 Thankfully there were occasionally signs like this... or we would have never gotten out: 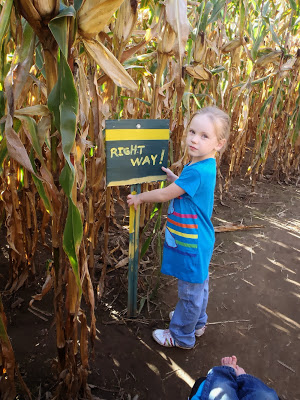 Finally we stumbled out of the corn to freedom... and the girls picked out their pumpkins (moments after my camera went dead!). 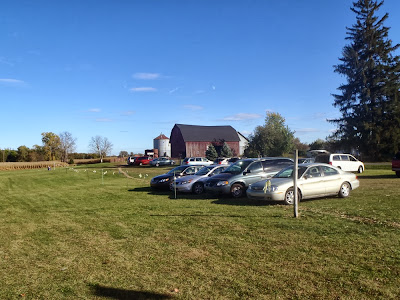 In other news I'd like to introduce the newest members of our family...

Finny and Goldie (named by Sadie).

Before Paul and I got married I worked in an aquarium warehouse for a few years (I think four altogether).  I've had seahorses, propagated hard corals, had the ugliest little tank with box fish and a horse shoe crab in college and have had many other tanks set up over the years.

The girls wanted a pet.  Maggie loves gold fish with a passion and can sit and stare at them for hours...

And so I made the thirty cent investment yesterday afternoon (the price of teeny feeder fish have risen over the past decade) and brought home two new fish.  The girls are thrilled.  And the feeder fish have a pretty nice setup (for feeder fish... I guess I need to stop calling them that soon..): 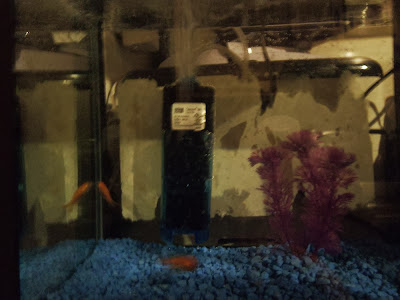 I'm sure we'll be having all sorts of imaginary adventures with Goldie and Finny... because, you know, it's Sadie.

For more Week Ending head over to Re-inventing Mother!