Homeschooling: The First Half of the Year 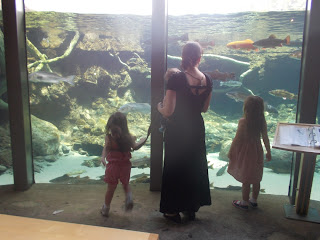 You know what happens when your daughter turns five in June and announces that what she really wants for her birthday is to start kindergarten the next day (although you drag your feet and make her wait until the following Monday so that you have a little extra time to prep)?  It means that midway through October you hit the halfway point of the school year.

And I have to say... It's been way more fun than I expected it to be.

You see, when I first started thinking about homeschooling I was working as a coach at a high school back in California.  Sadie wouldn't arrive for a couple more years.  But Paul and I began to talk about what kind of education we'd want our children to have.  Because of my own experiences I would likely have been drawn to homeschooling anyways, but that job sealed the deal.  And Paul, was only too happy to agree.

So I began reading everything I could get my hands on.  I fell in love with the Well Trained Mind.  I read it twice.  And I eagerly awaited the day when we would start school. 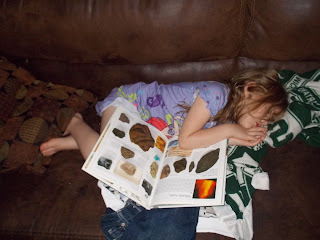 Yet while I was in love with the idea of homeschooling in the abstract, I wasn't sure what it would be like day to day.  It would be a lot of work, I was told, and had the vague thought go through my head that school or no school, life is a lot of work.  But I was nervous.  I didn't really doubt my ability to teach, because I've taught hundreds of people how to swim, and because like most parents, I've already been teaching my kids from the start in our day to day life, but I wondered what it would be like in the trenches of day to day schooling.  While I'd read plenty of posts that made me count the days until we started school, I'd ready plenty that made it seem like something to be dreaded too.  My feelings were mixed.

Then we got started.

Now I know we're still pretty new to this whole thing.  I know that I have a lot to learn, and will learn it, in the coming years.  And I know someone is probably going to say something like "just wait, just wait until something-something-something" when I will most certainly have days when I'm ready to throw in the towel. 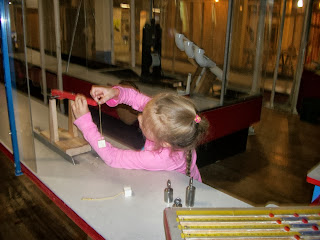 But we haven't yet, and in some ways that amazes me.

Okay, I'm sure it helps that I'm starting with Sadie.  I have a feeling she's the kind of student that most teachers would love to have in their classroom.  She begs for more work.  She asks to do school on the weekends.  And she absorbs information like a little sponge and then repeats some complex science fact that she's learned two months later, leaving me wide eyed.  When I let her, she watches science documentaries for fun.  And then she begs to watch them over and over again.

So my main "problem" is having enough for her to do.  Because I remember sitting in first grade where the teacher would draw lines in my books and say "don't go past this line" so I wouldn't get too far ahead and so I would finish the work in five minutes and sit there waiting.  Since we aren't in a classroom Sadie wouldn't have to sit there waiting, but since she's so passionate about learning more, I'm just going to have to figure out a way to keep up (which means planning more than a week in advance for those days when she does a weeks worth of work all at once).

And the "work" part that I'd been warned about?

Doing school with her doesn't feel like work to me.  It's a refreshing break in my day.  I sit down and answer her questions.  Often times I'm holding Patrick.  Other times I'm holding Maggie.  Sometimes they're both climbing on me, or pulling at my skirt.  Sometimes Maggie sits at the table and draws next to her sister.  Once and a while she'll sit in the same chair next to Sadie.

I have to say, that of all the things I do during the day that feel like work, school isn't one of them.  Cooking everything we eat from scratch with insane dietary restrictions feels like work. Changing diaper after diaper gets a little old.  Cleaning the house and doing dishes?  Definitely work.

But school?  School time I love.  I love snuggling up on the couch and reading the latest Little House book.  I love trips to the library to get new books for the week.  I love going on field trips and seeing their little faces light up as they learn something new.  And I love lining up My Little Ponies on the table and doing "pony math" with Sadie (she will tell you that math and religion are her favorite subjects... using my little ponies as manipulatives may have something to do with that.).

Maggie and I have started doing school too and I have to say, it's less of a challenge than I expected.  She's interested in what her sisters doing and she can have laser like focus when she sees we're doing reading or math.  She draws shapes and letters on her own.

Halfway through our first school year I can say with growing confidence that this was the right decision for our family.  My hands might feel very full on some days, but even during particularly challenging moments I can't imagine wanting to be anywhere else.
Posted by Cammie Diane at 8:35 AM