The weather here has been promising to be extra crazy all week.  The Governor gave a press conference to talk about how dangerous it was going to be and then I saw the forecast on our local ABC affiliates facebook page and thought, oh wow, that is much, much worse that I thought after listening to the Governor's talk about flooding and general mayhem.  It said:


"If I had a kitchen sink advisory I would throw that in as we will see a bit of everything the next 30 hours. Winter Weather Advisory until Friday evening. This is how it lays out. Rain moving in at sunrise will become freezing rain as temps will not climb above freezing until around lunchtime and northern areas may take until afternoon. The rain and warming temperatures will cause widespread fog until a warm front moves north toward evening. That front will bring temps near 50 degrees with a few thunderstorms. It will also bring strong winds to push out the fog but with gusts to near 50mph Thursday evening into Friday morning wind damage is possible. NOT DONE YET... around 4 AM friday a cold front will zip through and change winds to the west causing temps to tumble and bring in snow showers off the lake by dawn and all day Friday. High on Friday near freezing. Told You.. kitchen sink..Andy."

And so I kept watching out my window and waiting and trudged down to the basement and tried to guess where the flood waters would start seeping in this time and moved boxes away from those places while bracing myself for mice jumping out at me, but after twenty-four hours nothing happened.  Well, not quite nothing.  It snowed all morning yesterday, but snow is hardly shocking at this point.

Then I saw another update yesterday:


"Please no sharp objects around as you read this. Halfway through this crazy weather pattern. The other shoe will fall around 4 AM when the cold front moves across the area. As Ernie Harwell used to say " get your scorecards and pencils ready for the lineup". Here goes... Warmer air is still on the way late evening and the first part of the overnight. A warm front is moving north and will put us in the 40s to near 50 degrees by midnight. That combined with more rain and snow cover, look for some fog. The cold front will cross the area around 3 to 4AM. Along this front will be showers and storms and quite windy conditions. It will not make it through unnoticed. From that point on temperatures start to fall and winds will get very gusty to near 50mph and remain that way through Friday. Snowshowers will develop and will coat the ground again by the morning rush hour. We all will wake up to temps near 30 degrees. Yep from 30's at dinner time to near 50 at midnight and then near 30 at dawn. So do you really want to hear about Friday now?? Well I am paid to bring you the weather so here is the rest. Friday has on and off snow showers with blowing snow as well. Temperatures will be in the upper 20s during the afternoon and winds still gusting between 40 and 50mph. This means Wi .... Wi.... Windchills (there I said it) head back down to near zero by evening. The topper to all this is we then will stay below freezing the next 7 days at least. Andy."


Yes that would be a weather report that starts with "please no sharp objects around as you read this" because the temperatures were supposed to be rising up to fifty degrees, followed by 50 mph winds, before plummeting below freezing again with temperatures feeling like 0.

Did I mention that we had a thunderstorm last night too? And that right now as I type this I hear the wind howling around the house, doing it's best to deliver those promised 50 mph winds?

I don't even want to think about what the ice is going to be like out there today.

You win, Michigan, you win.  This is the weirdest weather I've ever seen.

Paul and I were messaging each other back and forth last night before he left the law library and he kept asking me if there was anything that I felt like asking him to bring home, because he knows that my hormone fueled cravings are off the charts.

I think it's a combo of a certain toddler deciding his primary calories should still come from nursing, along with growing a baby, even if that baby is teeny tiny itty bitty right now.

Anyways, I've had the appetite of a NFL player lately and I am pretty much starving all. the. time (yes, yes I eat protein... and am still starving and eating a ton and not yet gaining weight, thank you very much Boomer-don't-worry-I-don't-need-lunch-I-can-just-have-milk-Xavier).

I was trying so hard to be good though and not devour a late night snack when Paul asked a third time if I was sure I didn't want anything, because he was leaving the law library soon and I was like "Wait!  Quick!  Go by McDonald's!  I need a McDouble without cheese right. this. second!!!"

Then Paul called sounding less than happy and said that upon leaving McDonald's the car had started to rumble and he'd pulled over and found one tire was completely and totally flat.  So in the dark and cold and wet he had dug through the back and found the spare and changed it.

But the really, really bad part is that when he called my first reaction, for a split second was "Oh no!  The McDouble is stuck and can't get to me!" and then the concern for Paul changing a tire in the dark and cold kicked in a split second later so that I could fret and fret until he finally made it home.

And he did make it home safe and sound and smiling.  He handed me a McDonald's bag (and I added super hot hot sauce to the meal) and we settled down to watch Dr. Who while I pondered how to control the Roku since a certain 15 month old absconded with the remote and it's currently missing.

While I was thinking this conversation happened:

Paul:  "Why are you making that face at me?"
Me:  "What face?"
Paul:  "The angry face."
Me:  "This isn't my angry face. It's my thinking face."
Paul:  "I think I can see where most of the disagreements we've had in our marriage have come from then."

When I told Paul later that I was going to blog about the conversation above he asked me clarify what I'd said because apparently he thought I'd said that it was my "thanking face" not "thinking face."

That really would be a problem.

Apparently I have lost my rosary making calluses on my hands and that has seriously slowed down the production of my Indigogo thank you rosaries and chaplets!  They're getting finished, and I'm getting faster each night as my hands are getting tougher again but wow!  I cannot believe how wimpy my hands got after a year of sewing and knitting and not making many rosaries! 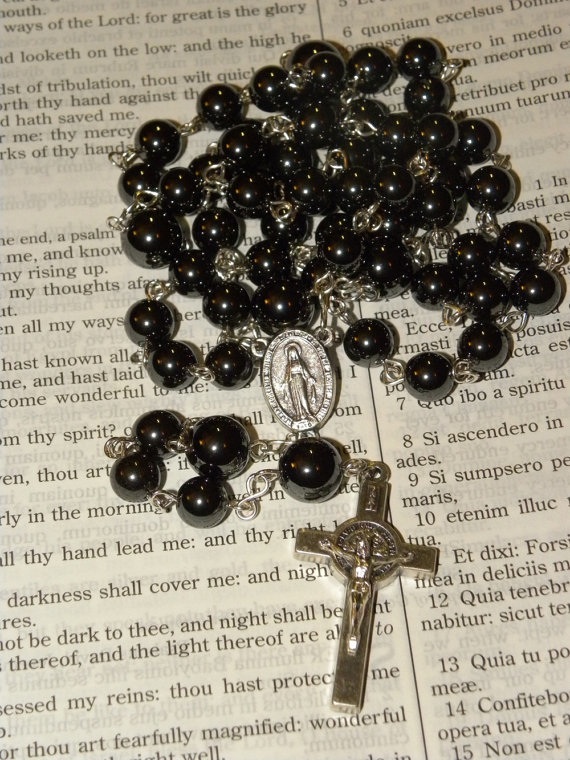 I need to add an update to last night's post, but a call was put in to the credit card company yesterday and they agreed that what the Lansing Best Western Plus had done was fraud and refunded the amount that they took out of the account last week.  So thank you to everyone for the advice because Capital One got done in an hour what we'd been trying to do for months through Best Western.  Now to watch the card and make sure they don't try anything funny again...


For more Quick Takes, visit Conversion Diary!
Posted by Cammie Diane at 8:05 AM