I don't see many mice in my near future.  At least not scampering free.

Our cat search yesterday afternoon was a success, which is amazing considering there was one type of cat that we were looking for that we thought might work with Sadie's allergy (and that we might actually find in a shelter).  We were searching shelters for a Russian Blue, because Russian Blue's produce much less of the enzyme in their spit that most people with cat allergies are allergic to (or something like that, I just could not find the article I was reading a few months ago that talked about it), but after driving an hour to see a Russian Blue that was supposed to be in a not-so-nearby shelter and finding him gone, we were discouraged.

We went by Petsmart and a worker there gave us directions to another shelter where we found not only a Russian Blue, but a Russian Blue who jumped up on Sadie's lap and cuddled with her while she didn't have her typical non-stop-sneezing-watery-eyes-can-hardly-breath-through-her-sniffles-reaction.  So Paul quickly paid the adoption fee and we whisked "Kat Fish" home. 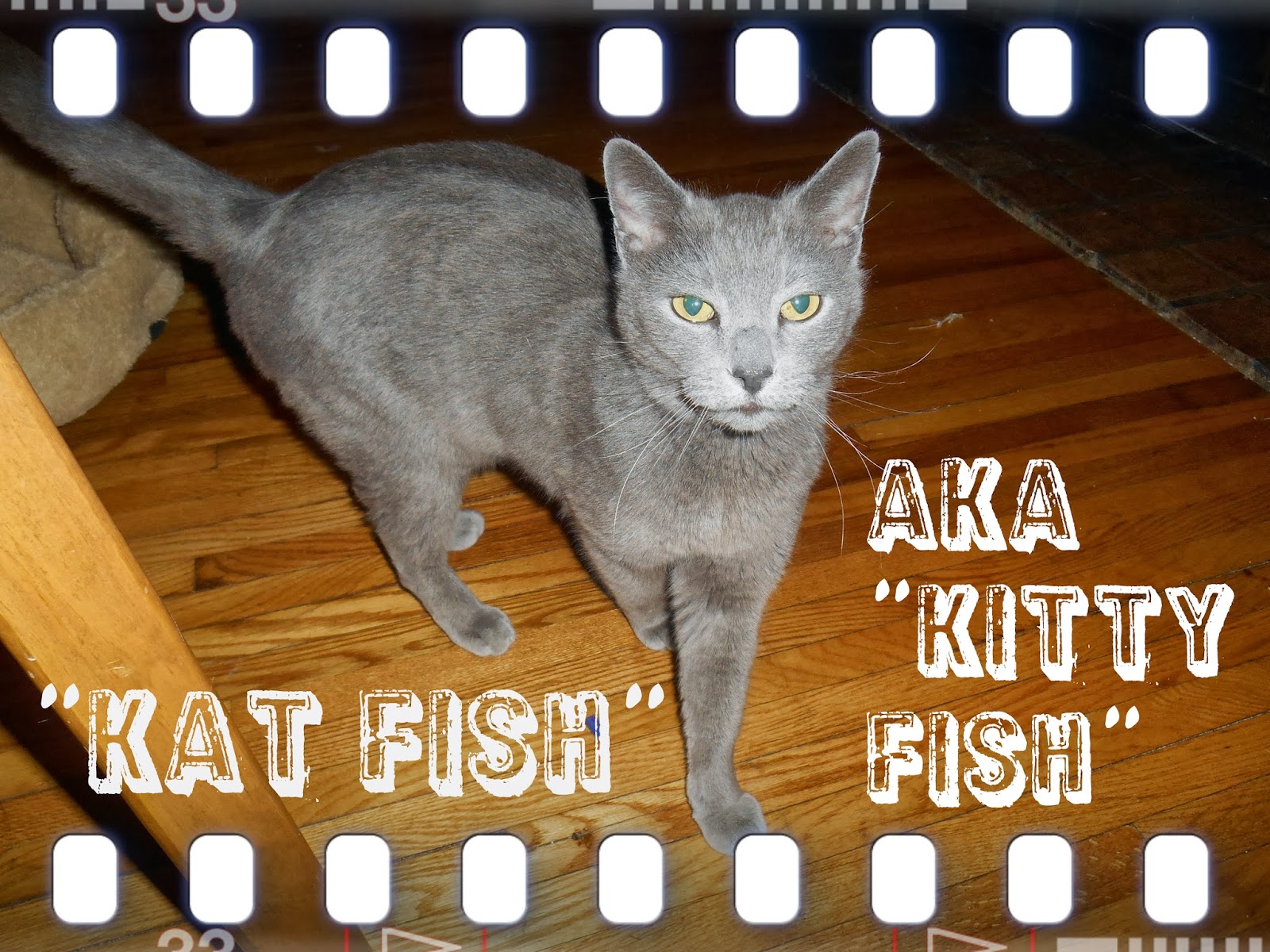 He came with the name and Sadie loved it, although she almost immediately began calling him "Kitty Fish" and "Fishy" as she rambled on non-stop about him.

He explored the house for hours after Maggie and Patrick were tucked in bed and any questions I had about whether or not he'd be interested in chasing mice have vanished.  He's does regular checks on all the vents (which I've thought is the mouse super highway) and even squeezed under the couch to check and make sure they weren't under there.  He can definitely smell them and has done some stalking and holding very still, although he hasn't gotten any yet.

But I also stayed downstairs much, much later than I've dared do in a while, and I didn't see or even hear a mouse last night so... our first night was a success.

I'm not too worried about any mousy presents.  After all, we've tried various traps (including super expensive poison) and I've been tripping over dead mice for three months...  although apparently they reproduce so quickly there are always more.

Up until the last few years I've had cats my entire life (I believe Kitty Fish is #13), so I actually have received plenty of Kitty Gifts (they were indoor-outdoor cats, although Kitty Fish won't be, so the gifts I received growing up included bats, snakes, mice, birds and an insane number of extremely ill tempered alligator lizards who almost always crawled up into couches to die), and have a fairly good idea of what we're getting into.

I'd hoped to postpone getting a cat until we owned our own place but... the mice... they've declared war.

Before Sadie went to bed she and Kitty Fish tore around the house together with him following her closely, practically attached to her heel.  They even played on the ground together, which was hilarious to watch.  I'm not sure I've ever met such a good natured cat.

And when Patrick started to cry Kitty Fish tore upstairs and stood by his door until I got there and then followed me downstairs and sat next to Patch while he nursed.

He wouldn't even eat the food I gave him until I brought it into the room so he could eat it next to me after I realized that he stopped eating and followed me every time I left the room.  During the night when I'd get up with Patrick he'd come running from whatever he'd been doing and walk with me to and from Patrick's room and lay in the bed while Patrick nursed and then walked back with me while I put him in his crib.  It's like having a little furry guard cat keeping me company wherever I go.

And who knows?  Even if he isn't great at catching mice I'm sure his presence as he runs from room to room with be a deterrent!  I have a feeling I won't be running into them over and over again anymore and at very least they shouldn't be strolling into the room in the middle of the day anytime soon!
Posted by Cammie Diane at 7:47 AM