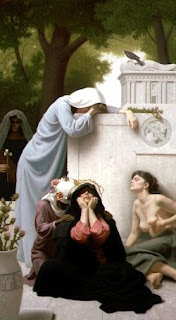 This article is heartbreaking...

"...The UK Telegraph reported April 28 that in the town of Rossano, Italy, a 22 week-old baby boy was aborted alive, wrapped in a sheet with his umbilical cord still attached and left alone to die. 20 hours later, he was discovered by a priest who went to pray beside his body and noticed that the baby was moving and breathing. Doctors then had the baby taken to a neighboring hospital to be cared for in a neonatal intensive care unit, where he ultimately died, nearly two days after being ripped from his mother's womb and discarded like trash.

His mother decided to end his life because prenatal scans suggested he was disabled. Suggested. Possibly disabled; declared unworthy to live. He was murdered by heartless animals wearing lab coats, who have medical degrees hung in frames on their office walls. He was handed over to death by the one who was entrusted by God with his care, and he was killed and thrown away by those who take an oath to "first do no harm..."

I can't even find words to respond to this evil.
How can anyone think that ending an innocent, defenseless life, could possibly be a "right?"
(Photo from Catholic.org)
Posted by Cammie Diane at 12:21 AM