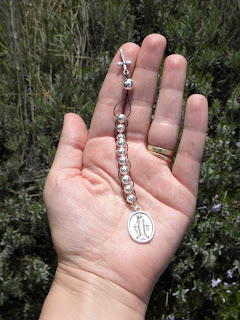 I love sacrifice beads!
Two weeks ago if you'd asked me what they were I would have given you a blank look. Then I received an email on etsy asking if I could make some. So I googled it and up came a site that explained what they were and how to make them. And after some failed tries because the materials I were using weren't working (finding a flexible cord that could fit twice through the beads I had took some time) I had a set of sacrifice beads and began carrying them in my pocket to see how sturdy they were.
I must admit, I have a rather competitive personality and these days I'm the most competitive with myself. Having that little string of beads in my pocket brought out a new drive to, for lack of a better description, be good.
My husband would probably agree that I can be a little... snappy... when I have pregnancy hormones coursing through my veins (particularly in the first and third trimesters). Having a giant baby whose head is already bumping into my rib cage and whose feet are right above my bladder has not put me in the best of moods.
This last week though when I've found myself feeling short tempered I've taken a deep breath... and thought about the beads in my pocket. Several times when I was wearing a dress without pockets and didn't have the beads with me, I just imagined sliding a bead over rather than saying the thing I'd been thinking, or pushing the point I'd been making and trying to make the other person see my point of view. And it's getting easier. After only a week when I hear something that annoys me or someone says something mean, I actually have to keep from smiling, because I'm reaching into my pocket to slide a bead over...
Good deeds mean a bead slides over too.
It really can be motivating.
Sacrifice beads can also be used as a kind of pocket rosary, with one Our Father bead separated from the ten Hail Mary beads. When you pull the ten smaller sacrifice beads they slide up the row and stay in place until you pull them back again.

The story of sacrifice beads begins with the story of Saint Therese of Lisieux. As a chlid The Little Flower, along with her sisters, used a little string of beads to count their gifts of "little sacrifices" which they did out of love for God. They carried their beads with them in their pockets.

Saint Therese's "Little Way" is well known. She drew closer to God through small acts in her day to day life, saying:

“Love proves itself by deeds, so how am I to show my love? Great deeds are forbidden me. The only way I can prove my love is by scattering flowers and these flowers are every little sacrifice, every glance and word, and the doing of the least actions for love.”