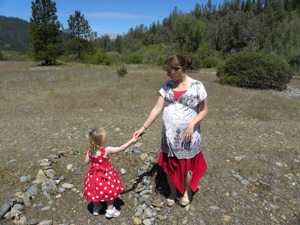 When I burst through the bed room door last night, hands on my hips and lips pursed, Paul had a pretty good idea he was about to go face to face with pregnancy craziness.  After all, he's accompanied me on the pregnancy journey enough times to recognize the signs.  I imagine there are pregnant women out there who don't encounter this sort of craving-related craziness, however I am clearly not one of them.

He'd been trying to go to bed early since he's been up most nights studying (one final to go!), but had been sucked into one of those facebook debates that goes on and on (this one was about law and was possibly the nerdiest facebook debate in the history of the internet).  I had been on the couch, finishing up pinning something like a dozen headcoverings (I'm getting ready for major time in the car when I can hand stitch the sides of the dozens of snoods I have that only need to be finished by hand) and watching old episodes of Grimm on Hulu (Hulu helps get me through my least favorite sewing task... pinning...) when the nine o'clock cravings hit.

Usually I'm not a late night eater, but with this pregnancy, food still doesn't sound great in the morning... It sounds necessary by lunch time... and it's okay at dinner time... but at nine o' clock at night I'm so hungry I could eat an entire olive, mushroom and onion pizza.  And that is exactly what I was craving last night. 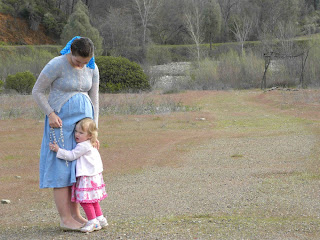 But it was okay, because we'd had a you've-ordered-so-many-pizzas-while-you're-husband's-been-in-law-school-that-we'll-give-you-a-free-one for dinner earlier in the week and there had been two leftover pieces.  Since I knew that one of those pieces was mine and I had not eaten it, I knew it would still be in it's happy little pizza container on the bottom shelf waiting for me.  I walked to the fridge and opened the door and there it was... not...

I stormed across the apartment and flung open the door and declared that I was practically starving and had been so excited because for once we actually had the exact food I was craving and I saw the look of recognition dawn on Paul's face as I stood there, eyes flashing.

He had a typical defense: after 36 hours he'd thought I'd abandoned the pizza and didn't want it anymore. Why didn't you ask me I said, still glaring.  It was five a.m. was his lame excuse, and I didn't want to wake you up.  Then you shouldn't have eaten it!  I declared.

It was clear that the food-related-pregnancy-crazies had arrived at our apartment, and as I suggested he get his shoes on and head out to retrieve a pizza, he suggested I get on my computer and order another pizza and he'd go down and meet the delivery man in half an hour.

Half an hour!  I threw myself on the couch.  Paul peeked out the bedroom door, perhaps checking to see if the craziness had subsided, and offered some legal sounding defense about how the pizza had come to be his.

Thirty five minutes later the pizza arrived with a side of super spicy buffalo strips that I know no one else in the house will eat (okay, Sadie and Mae both love spicy, so they actually probably would... but they aren't the ones who go through the fridge at 5 a.m. while studying for finals so they're easier to keep tabs on).

And I survived... outlining clear rules for the three pieces of pizza that remained.

At least food is beginning to sound good again!  Sometimes at least...
Posted by Cammie Diane at 8:06 AM