Day 2 of The Great Cross Country Drive: Tallahassee to Biloxi! 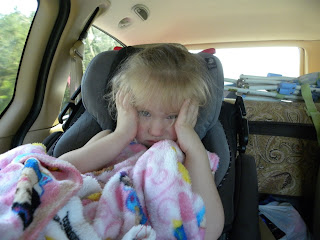 Sadie and Mae both woke up at exactly the same time, at 6:45 on the second morning of our trip.  For our family 6:45 is most definitely sleeping in, especially after a luxurious 10 hours of sleep.  We were all pretty worn out from getting everything ready for moving for two months, but last night definitely meant we were all well rested and ready for another adventure.

We ate a quick complementary breakfast at the motel and then set off on the road.  About five minutes into the drive Paul and I were debating our travel styles.  There were two ways to get to the freeway.  One was closer and more direct.  The other would put us on the freeway further down, but would take us through "downtown Tallahassee" (according to the signs).  I voted to drive through the downtown, just to see what it was like.  Mr. We-Take-The-Most-Direct-Route-And-Don't-Stop-For-Any-Reason (that's a slight exaggeration... we did get to eat lunch three and a half hours into our drive and we stopped briefly for gas...) vetoed my vote and went straight.  This ended with a debate about the best ways to take a trip, with me sighing as he said you get to where you're going quickly... while I lamented that it's the detours along the way that make a trip fun. 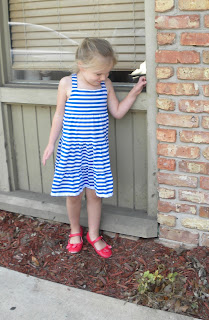 We needed gas shortly after crossing into Alabama and pulled off the freeway next to two large buildings that let us know that apparently Florida's firework laws are stricter then their western neighbors and that plenty of people must cross the border for their Fourth of July supplies.  Then we were one to Mobile.

I'd plotted this out.  I was fairly certain we couldn't make the drive to Mobile in one day, but ever after a particular episode of House Hunters (at least I think that's what it was) I've wanted to visit Mobile.  So this meant I had to find a way to get Paul off the freeway, hopefully for more than five minutes.  We arrived just after 12 and I excitedly pointed to the signs for the downtown.

After not finding a restaurant in the first five minutes things were beginning to get tense in the little tan mini van.  Paul kept pointing out fast food places while I encouraged him to drive a little further and pointed out the fantastic houses and buildings that were everywhere.  Apparently hungry people don't appreciate their spouses pointing out beautiful architecture.

Luckily we stumbled across Saucy Q's Bar B Que, with a bustling parking lot and pulled in to find delicious pork sandwiches and Mac and Cheese for the girls.  Suddenly my idea of getting off the freeway was a good one and the drive back to the freeway was much more pleasant, with me sighing over a beautiful abandoned house we drove past that was just perfect (or at least it would be after a whole lot of work). 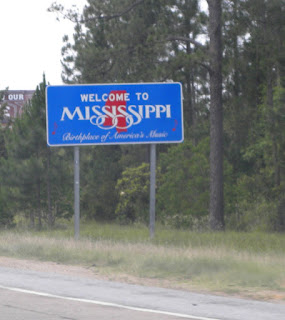 The drive into Mississippi was quick.  We were both slightly nervous about the hotel.  I'd booked it on Hotline, which means we had no idea which hotel we were booking when we paid $39 for a "3-star hotel near the beach."  We ended up in a lovely room (especially for the price), with a view looking out on a beautiful beach in Mississippi (it also happens to be a casino).

Now for the saddest part of my day.  On the way into Biloxi, I saw a sign for Krispy Kreme doughnuts.   I haven't had a Krispy Kreme doughnut in roughly five years.  And it's been one of my pregnancy cravings.  So I begged Paul to drive to Krispy Kreme and we went in and set the girls up at a table.  My hot glazed doughnut was in front of me and I was so excited I could hardly wait.

One bite.  Two bites.  Three bites.  Then it happened.  Disaster struck (okay, I know, it an exaggeration, but when you're pregnant and something like this happens it can feel like a disaster).  Instant food triggered migraine (which is why I've  been blogging with my feet in the bathtub).

I attempted denial.  We'd just bought a dozen doughnuts which Paul promptly announced I wouldn't be eating (because the migraine affects EVERYONE!).  I guess it's just the sugary-ness... but usually I have to eat more than one wonderfully melt in your mouth sugary treat to put me over the edge to a migraine.... usually it's something more like a coke and a bag of skittles.  I've never had it happen with a pastry... sigh...

Thankfully after a long night of migraine it's gone today and we're ready to head off towards the great state of Texas.
Posted by Cammie Diane at 9:22 AM