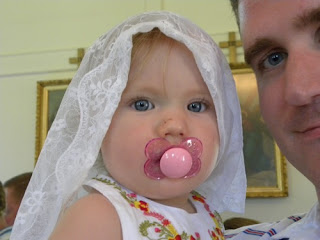 A few months ago, in an attempt to try to get Sadie to stop trying to convince each and every priest she comes across that she's old enough to receive communion, I explained to her that someday, when she was much bigger, she would wear a beautiful white dress and a veil and then she would be able to receive.

Can you see where this is going?

This morning she woke up in a mood.  I'm not sure how someone can sleep twelve consecutive hours and wake up yelling:  "I want to sleep" when everyone else is getting up, but that was where we were at 6:45 this morning (not an unusual wake up time for us, if it's anything, it's about 45 minutes later than normal). She stomped out of the room and burst into tears when I suggested she eat breakfast before getting dressed.  I could only imagine what Mass was going to be like.

Still, after breakfast when I pulled out her two fancy Church dresses and gave her a choice, she perked up instantly.  She excitedly picked out her Easter dress, which happens to be sparkly and white.  Then, when I went to pick out a snood for the day she happily took her veil and began modeling it in the mirror.  It's a veil that I bought for her years ago, and it's ridiculously large, falling all the way down her back, but I think that only makes her love it more. 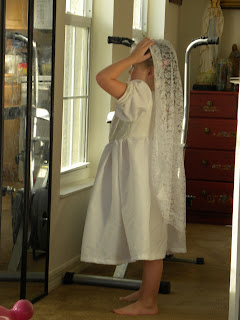 As she cheerfully walked across the parking lot towards the chapel I reminded her that, despite the outfit she had happened to pick out, she was not big enough to receive.  She looked at me, smiled and said:  "Best behavior, right Mommy?" before we walked through the front doors.

Now I have a confession to make.  As an adult convert I clearly remember when RCIA candidates are usually confirmed, but if you'd asked me when first communion took place I would have had no idea whatsoever.  I might have been able to guess spring, but I'm not totally sure I would have even figured that out.  So it wasn't until the homily when father mentioned first communion that I realized that it was apparently this weekend and Sadie had managed to leave the house dressed like she was ready to go.  I could just see where this was going (tantrum in the near future anyone?).

Thankfully, though, today was the rarest of all days.  Sadie and Mae, for the first time in approximately 22 months (Mae's age) both sat nearly silently for all of Mass.

I was planning on writing a bit more, but it's 9:31 and my eyes are barely open right now... so I think I'll have to call it a night.
Posted by Cammie Diane at 9:37 PM