Day 9 of the Great Cross Country Adventure: Tucson to Williams 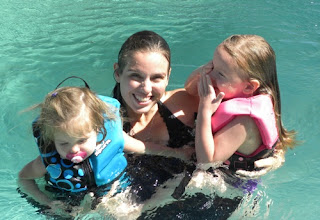 Day 9 was the single longest day of driving on the trip up until that point.

We started out the day in Tucson, and after repacking the car, with all the new fabric stored safely inside, we headed north towards Phoenix.  I had carefully mapped out the day so that we would reach Chandler at lunch time, since I’ve been craving the Spaghetti Factory’s Garlic Cheese Bread for months (and honestly probably for more like a year since it’s one of my favorite restaurants and even when we lived in California we still lived hundreds of miles away from the closest location).

Unfortunately, shortly after leaving Tucson, the air conditioner completely stopped working and our mini van rapidly became very hot.  110 miles later, roughly a mile from the restaurant, it kicked back on.

I spent lunch hoping that it would start back up when the car stopped (while being thankful that neither of the girls felt like trying the garlic cheese bread, because I’m pretty sure if either one had tasted it they would have devoured the entire plate in about two minutes flat). 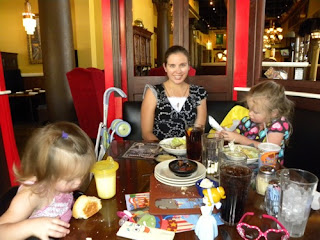 Instead Mae Bae attacked the regular bread loaf.  Paul cut her off a generous, 3 inch across end piece and after a few minutes of eating it she spotted a break in bread security and swiped the rest of the bread, so that she had a loaf in her left hand and her end piece in her right.  After a debacle involving butter (she acted like she wanted some and then was highly offended when Paul listened to her request and put butter on her small piece of bread), she settled in to eating bread, macaroni and cheese and ice cream.

After leaving the mall we put more gas in the tank (so far gas has steadily risen in price since we left Louisiana… it dropped from Florida to Louisiana, and then has risen from Louisiana west, with notable jumps in small towns, which we pretty much expected).

Yet as we headed north towards Phoenix, something happened…  I started to think that the desert was actually quite pretty.

Now let me preface this whole next section with an explanation.  As many of you know, Paul attended the University of Arizona for his undergraduate degree.  He’s a big Wildcat fan.  I think if he had the space he would have a Wildcat room in our home.  He’s also a big Tucson fan.  As a result of these two facts, he has a natural competitive rivalry with ASU and the entire Phoenix area. 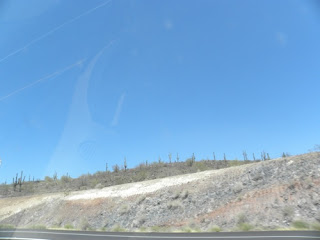 And you see, he spent the previous forty-eight hours before we left Tucson, asking me repeatedly what I thought of every single street we drove down, and practically every grouping of buildings we passed by.  Did I think they were pretty?  Did I like the mountains?  What about that mountain?  What about that brick building?

My lack of enthusiasm about the desert landscape immediately off the I-10 was not pleasing to him (I’ll admit that I don’t think that’s the best representation of the desert landscape, but it’s mostly what we saw since the rest of the time we were in the city).  And I must say my hesitation was also influenced by the fact that I really don’t feel like packing up and moving from the swamp to the desert when he graduates!  Give me a place with four seasons please!

Besides, whenever I drive through the desert I find myself checking off the list of survival skills I possess and while I’ve always felt I’d be okay in the forest, I think I’d be a goner after a single day in the desert (I know, I’m weird, but those are just the kinds of things I’ve always thought about as we’ve traveled, since I was a kid).  By the time we hit Chandler I was hoarding water and sipping slowly off of my bottle on the off chance that we broke down on the 10 and were somehow (completely illogically since it’s a major route) trapped there for any length of time. 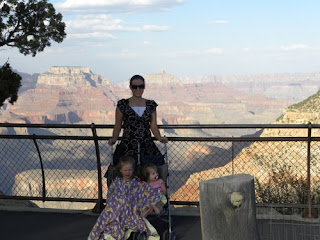 Anyways, back to the original point… as we entered Phoenix I found myself pointing things out in an obvious “Oh, look, isn’t that cool” sort of way.  I tried, vaguely, not to be overly enthusiastic, but I kept seeing things that were neat and pointing them out and Paul started to get the idea that I liked Phoenix, which was something he’d spent the previous two days trying to cultivate in Tucson, until at last he exclaimed that I like the “fake desert” and not the “real desert” like Tucson has (because I liked how neat the desert was on the I-10 around Phoenix…).  Yeah…  no competitiveness there at all, right?  I think I know where Sadie gets it from…

Thankfully upon heading up into the mountains, and passing Flagstaff, we finally found a town that we could agree on in Arizona.  Williams is a small town on Route 66 and we used it as our base for our adventure out to the Grand Canyon… but I’ll spare you the details of that part of our day here, since I already wrote about it a bit on Friday's Quick Takes.

By the time we entered Nevada I was quite smitten with the whole Northern section of Arizona that we’d driven through…  It’s definitely one of my favorite parts of the country so far… and at least there’s one town that we agree on!
Posted by Cammie Diane at 10:36 AM