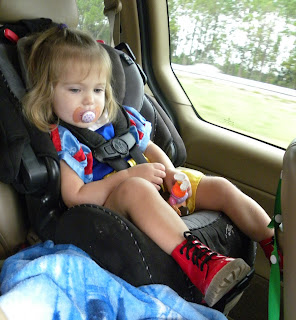 We survived packing up and leaving the apartment, which seemed to be the hardest part of yesterday’s rather long 14 hours that ended when we were all safely tucked in at our motel.  The day started at a normal 6 am, and the girls and I went on a walk with a friend and had one last quick play date with two of Sadie and Mae’s best buddies who will have likely moved out of state by the time we return.  Then we hurried home through a rain storm (which wasn’t bad until we had to open the door and rush through directly under a ledge that dumps a steady stream of water!) and began to finish packing.

Sadie was fairly certain that we were going to forget to bring her (I pointed out that never in her not-quite-four years have I left her anywhere!!!) and held onto my skirt for much of the two hours until we left, making for an extra packing challenge while occasionally wailing that she was ready to leave.

Then we were on the road headed north.  South of Fort Myers Sadie asked if we were in Oregon yet (and no, Oregon isn’t on our route west from Florida to California!).  North of Tampa I realized that I actually think that the middle and northern parts of the state are quite pretty and shouldn’t be lumped in with my south west “swamp” classification (although South West Florida has certainly grown on me… coming about 1 inch from tripping over a decomposing iguana last week, and a opossum earlier in the month, both while walking down sidewalk in town, certainly doesn’t help!).  And we all marveled as we drove through Ocala and saw the beautiful horse ranches with their own race tracks alongside the highway. 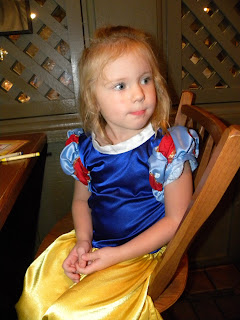 The girls were great.  We listened to music for almost two hours and then pulled out the DVD player that Grumpa and Nani left with us when we moved to Florida and put on Mae’s favorite DVD (with Diego and Dinosaurs!).  Sadie watched out the window and asked questions and squealed at baby cows, while loudly saying:  “Hey Guys!” and Mae Bae played with her red boots and giggled and babbled.

We made a stop at Cracker Barrel north of Gainesville almost five hours into our drive and marveled as our table was covered with food for incredible prices ($7.99 got me two eggs, grits, fried apples, biscuits and a huge country fried steak which Sadie and I both ate… and half of it was still unfinished by the time we left.  It was a lot of very good food.  Cracker Barrel is now a family favorite.

An hour and a half later we were at our motel in Tallahassee.  Mae Bae ran laps around the motel room and after realizing she still definitely is not ready to sleep in a bed (fifteen minutes of purposefully trying to kick her sister), so Paul headed down to reception and got an in room playpen that she instantly fell asleep in.

Now for Day 2 of our Cross Country Trip!
Posted by Cammie Diane at 3:34 PM