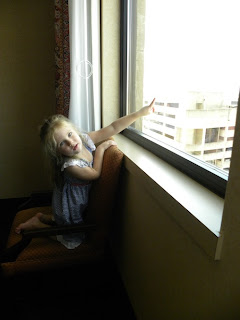 Where to begin?  The last time I looked at the clock before falling asleep last night it was 6:54, and between then and now so much has happened.  It's nice to think back on the much calmer yesterday and to remember how much fun it was!

We woke up early and packed up the van, which was on the other side of a giant security fence, complete with key swipe, to let us know that an area that sounded sweet and nice on a travel site, might not actually be as sweet and nice in real life.

After that we piled into the car and drove down I-10 a short distance to meet with some of my favorite blogging friends, in real life, for the very first time!  It's amazing, via the blogosphere and facebook, you can feel like you've known someone for years and it's wonderful to actually be able to meet and talk, even if it's only for a hour or two!

There was fun and wonderful conversation and pancakes and Mae trying to cover the floor with bits of egg while we attempted to stop her, and then we were back on the road, headed towards San Antonio.

Now I had made certain that the fourth day of our trip was a short car day, because I've been to San Antonio before and it ranks up there as one of my favorite cities alongside Inverness and Cape Town (in fact, now that I think about it, it might be my favorite city in the US... Paul sighs dramatically as I announced that out loud and said his favorite are Boston, San Francisco and Dublin...).  I wanted to make sure we had time to see all the things that I wanted to drag my poor unsuspecting family around to see and appreciate (at least that's how they viewed what was happening!)... 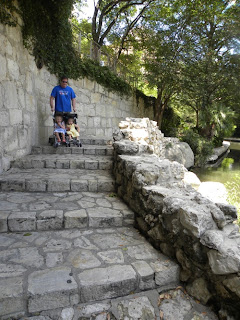 We got to the hotel and unloaded our luggage into our room.  I didn't have time to notice yet what a disaster the room was bound to be, since they'd apparently decided to give us the hand-cap access room, which wasn't the greatest situation with Sadie and Mae, since it meant that everything, including the locks on the doors, were right at Mae height, and there wasn't a bath tub, but a shower that made half the bathroom floor an instant death trap for anyone who wasn't totally sturdy on their feet.  But that fun was to be reserved for later in the day.

Instead we set out for the River Walk.  We strolled down the river, with Paul grumbling a bit each time we came to stairs, because apparently hauling a double stroller up and down flight after flight of stairs isn't his idea of a great time, while I pointed out how pretty everything was and he looked at me like he'd be able to appreciate it a bit more if he wasn't hauling 100 lbs of stroller and babies up cobblestone steps.

Then we made it to the cathedral and I knew that I'd won him over.  Even Mae, who's been something of a loose canon since she's off her regular-at-home-schedule, fell silent as we approached the beautiful gold tabernacle (there were kneelers right in front and the whole cathedral was just stunning!  I could go on and on but my words just wouldn't do it justice so I'll include some of the pictures I snapped at the bottom of the page!). 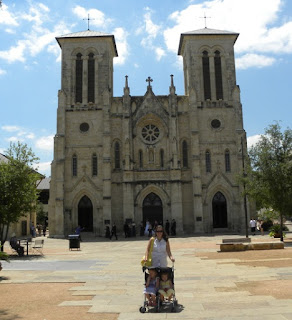 After the cathedral we wandered over to the River Center Mall to have a late lunch/early dinner and arrived just in time to see a parade of boats.  There was apparently some sort of Armed Services Festival going on, with members of the various branches of the military lining the inside of the mall, while tour boats full of their fellow soldiers and sailors and marines and airmen went by to loud music and cheering.

Once lunch, and the parade, had ended we picked up $4.99 pink princess sequined tiara cowgirl hats for the girls and headed over to the Alamo, where Paul, whose BA was in history, finally admitted that he does like San Antonio and that he was glad we'd gone out exploring.

We hiked back to our hotel as the announcements that the Alamo was about to close for the evening began to go out over the loud speakers and made it home with a rather cranky baby, who doesn't like to have her schedule disrupted and who quickly figured out how to operate and open the front door since everything was right at her level.  Then the fun of bedtime began.

I fell asleep, holding her hand through the bars of the crib, at an awkward angle, after repeatedly telling her to stop climbing up over the bars (what else could I expect from our little climber!).  And then I finally woke up an hour or so later to find her grip on my index finger relaxed.  The day was over and she was finally asleep.

And now for a few more pictures... first, as promised, the cathedral: 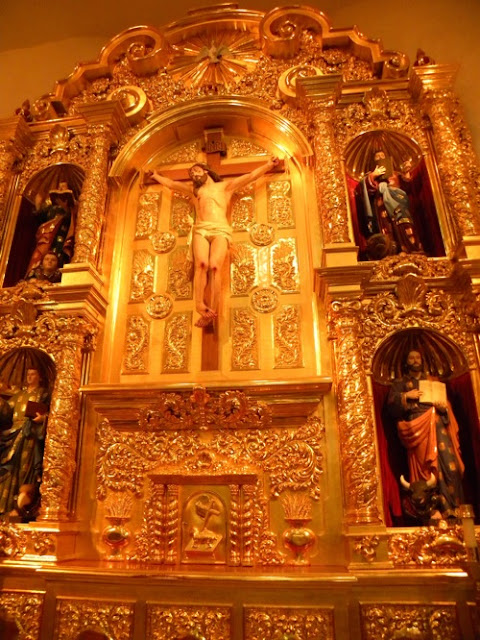 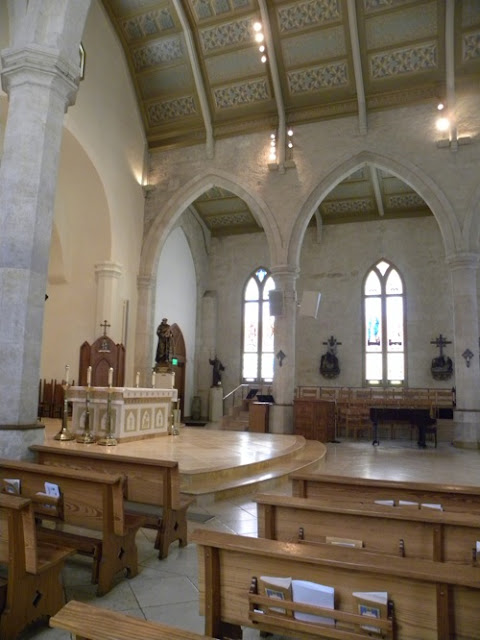 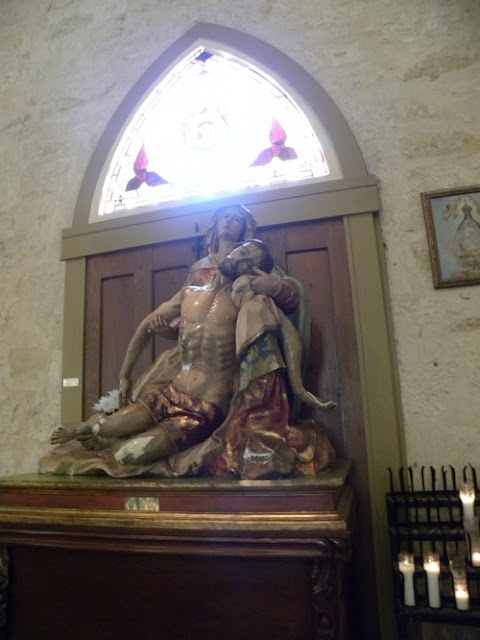 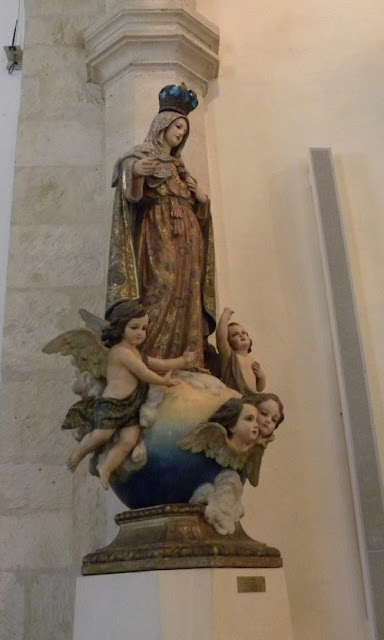 And then onto the Alamo: 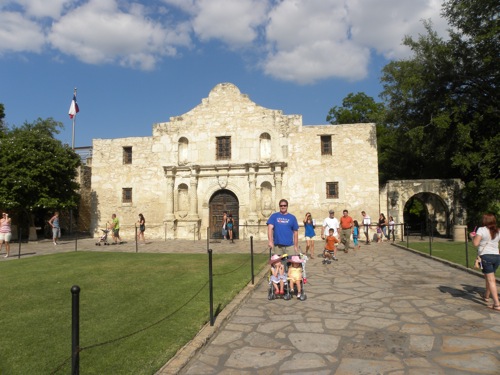 And with their hats! 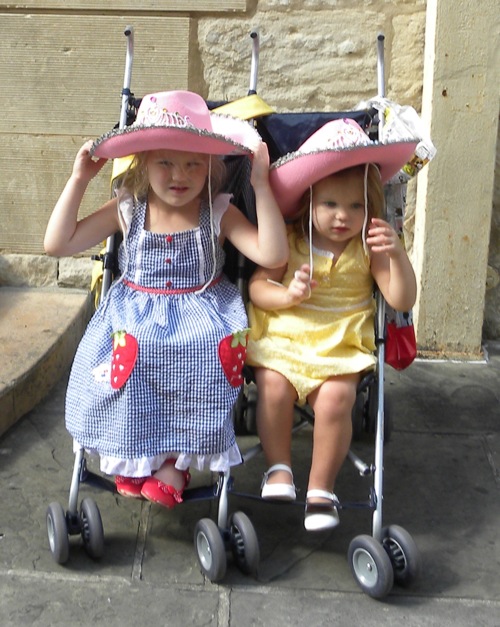