Today has definitely been the best day so far.  I slept through most of the night.  I woke up feeling better than I'd felt since this crazy week started.

Sure I had to be hooked up to my super IV of antibiotics all night, but it was with the hope that they'd be unhooked for a few hours in the morning (and they were!  Although it was an afternoon of 5 hours of antibiotics...).

As the day went on I steadily improved and for the first time began to feel a bit more like myself again!

These are some of the bruises that circle both arms.  I'm guessing I'm going to get a few more since I can't imagine they'll let me out without at least one more blood test.  I'm also really hoping the saline lock in my right arm doesn't go bad (or need to be used again).  It does feel like it's headed in that direction... but I just don't feel like I have any veins left to replace it with (and after 8 total tries with 3 successes, I don't want to try... with a grand total of 13 arm pokes I'm not seeing many veins that haven't been tried!).

I did get a nifty new inhaler today, and the respiratory specialists came in to show me how to use a spacer.  Since this inhaler comes out much more quickly than the others I've had, this should help a lot!

Sadie and Mae Bae both visited today, in shifts.  We knew that both of them would want to be in the hospital bed to be snuggled, and this bed just isn't quite that big.

Sadie cuddled up to me and told me that she wanted to stay in the hospital bed forever and ever.  Mae Bae snuggled up to me, gave me about 100 kisses and waited for an opportunity to rip my IV out of my arm (Sadie was afraid of the IV and pointed out that my hand needed to move away if the IV got too near her).  I barely stopped Mae from succeeding.

Surprisingly, neither of the girls cried when it was time to go home.  They're enjoying having so many grandparents around at the same time!

When they first brought me the hospital menu at the hospital I'm in, I was a little shocked.  When I had Sadie I lost major weight after I was somehow put on a liquid diet for three days following her birth.  So I've never had a really high opinion of hospital food.

Then the menu arrived and I read it, realizing that I could choose any of the items on the five page list.  I could have a personal pizza, a selection of pasta, pretty much every meat I could think of, sandwiches and salads, a pot pie, a turkey dinner, an oriental chicken salad, or dozens of other choices.  And breakfast was served all day.  And each meal came with a choice of three sides (including soup and salads), a drink and a long list of desserts.

Of course, the first day I was here I couldn't even think about eating.  I was lucky to manage a cup of apple juice and a sprite at the end of the day.

On my third day of being sick, however, one of the infectious disease doctor's suggested I ask for a menu and try to eat, so that they could see what would happen.  I was already stronger than I had been, so I gave it a try.  After marveling over the menu I tried the hummus tray, with flat bread and vegetables.  It was excellent and even my not-so-happy-stomach managed it.  I've slowly been working my way up to heavier foods (and more food, my tummy was tiny after not eating for so long), and I am getting stronger and stronger! 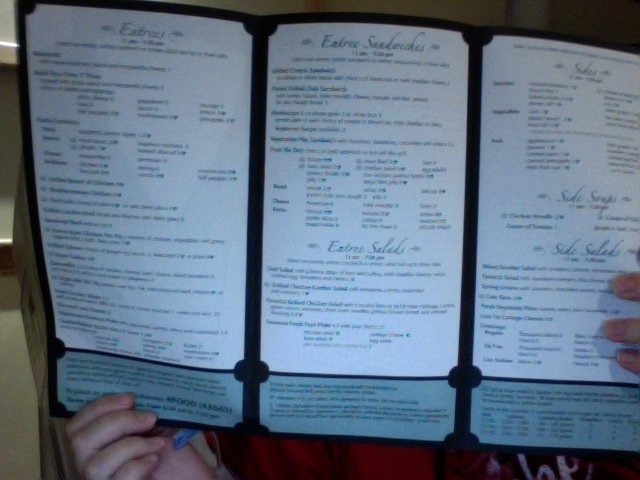 There were so many choices... but tonight I wanted to see if I could eat a mushroom and sausage pizza (I'd been sticking towards really light, veggie foods). I had hummus dip in the fridge from last night (these room have personal refrigerators!), so I went with a side of veggies and a chocolate shake as a special treat.  I didn't manage to eat all of it (except the veggies!) but it was a pretty great hospital dinner! 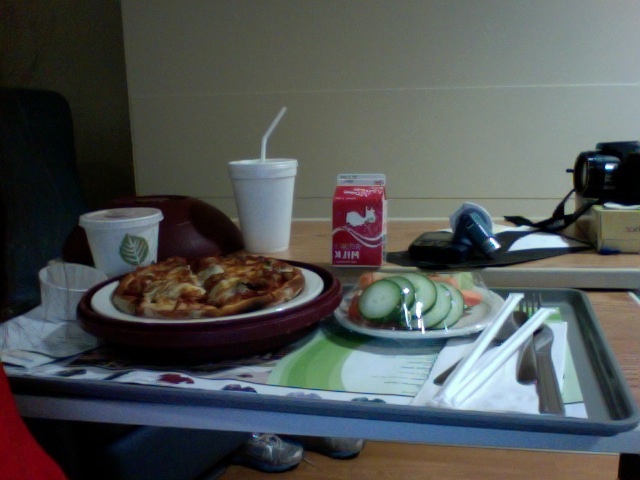 He said that they would have released me tonight, but because of the pregnancy they're keeping me for one more night to make sure everything's okay, and to watch what happens when I'm no longer on a constant IV drip of antibiotics.  I am glad that they're waiting through the night, because after the last trip home and then back, I'm a bit nervous about being off the medication and leaving the hospital.  Being here for a little while and making sure that my temperature doesn't suddenly spike and my blood pressure doesn't drop to 70/40, tonight after being unhooked for 12 hours, will help with that too.

But I have to say... I'm really impressed with this hospital.  Every single person has gone above and beyond to help us figure out what was going on and to make sure the baby and I got better.  I definitely feel good about coming back to have the baby here!