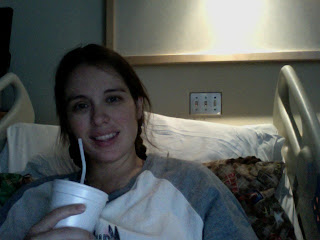 I began this post yesterday and wrote it on and off all day in between tests and pokes with needles and massive amounts of medications.  I was so exhausted last night that I just got around to finishing it this morning!  It's a little rambling... but here's the update:

I am a little bit pouffy at the moment.  After three bags of fluids, two giants bags of potassium and twelve bags of antibiotics they weighed me and found that in my shorts and t-shirt I was four pounds heavier than I was at my last doctor's appointment (when I was bundled in layers of winter clothes and wearing giant snow boots).  The nurses are hoping the doctors will let them unhook me from the fluids now when I'm not hooked up to the antibiotic bags, because I'm starting to look a little ridiculous.

So far I'm feeling better.  The fever has broken and my temperature is consistently 97 degrees.  The baby looks great.  The contractions have almost completely stopped as long as I don't move.  I feel like I have the flu, but apparently I don't, since the flu swab results just came back showing no signs of influenza.  Everyone is kind of baffled.  Every single test has come back negative (we're still waiting on some of the 72 hour cultures).  Everything says I should be healthy.  But the 103 degree temperature is something that they'd like to get to the bottom of (especially since I tend to be 97 when hooked up, but my temperature rapidly went back up when they unhooked me last time).

The infectious disease people would really like to add penicillin to the mix... but my penicillin allergy is pretty nasty and so I've repeatedly assured them that I really am really really allergic to both penicillin and sulfa.  I've also been taking tami-flu, just in case.

I woke up sick again at 3 am last night (what is it with 3 am?  That's when I've been my sickest for my last three nights!), but during the day I've felt much stronger... it really just feels like the flu at this point.

I've been moved over to the OB special care section of the hospital, away from labor and delivery.  Nani and Grumpa arrived from California (after being diverted to Indianapolis because of a storm... circling Chicago for 2 hours and then missing their connecting flight to Detroit... and spending the night on cots at midway) and Paul's Mom arrived from Massachusetts yesterday afternoon and is taking care of the girls (which makes it much easier for me to not worry!).

This afternoon I finally got unhooked from the IV.  The saline lock is still in (and boy does it hurt... since it took three tries to get it in it's in an odd spot that just doesn't seem to work very well), but I'm allowed to stay untethered to the IV post until it's time for the next antibiotic bag.  And I have a midnight blood test coming up to see if the vancomycin is doing what it's supposed to (and I should learn to stop googling the drugs I'm on because I might find something like this:  "Vancomycin is indicated for the treatment of serious, life-threatening infections by Gram-positive bacteria that are unresponsive to other less-toxic antibiotics.").

Unfortunately the hep lock went bad at around 10pm...  and since my veins were already so beat up (and aren't great anyways) they called an IV specialist.  She got everything ready and gave it a try.  I looked away and felt the poke, heard an apology and looked back to see blood everywhere.  It was time for try number two.  The 18 gauge needle went straight through the vein a second time.  I felt pretty sorry for the tech who was at this point obviously upset.  She went over to the other side, and tried again.  The needle went in almost painlessly and then... I felt it go through and the stinging pain started.  She apologized and left the room, while I assured her that my veins are pretty horrible, especially right now for some reason (although I was later told that she was almost in tears at the nurses station because she'd never missed that many times before on anyone).  It probably didn't help that a few minutes later an RN found a vein and got the IV to go in my arm on the first try.

And then it was finally time to sleep... for an hour before the next round of IV antibiotics started, and another hour and a half before the 12:30 am blood test was given.

And then I was out cold, which is one of the reasons this post is coming today instead of yesterday!
Posted by Cammie Diane at 6:22 PM