Bringing Little Ones to Mass... A Useless Venture? 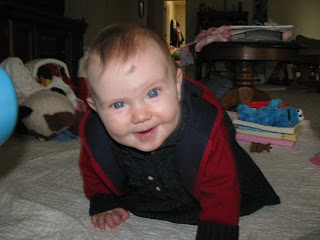 Last week, I read a discussion about taking children to Mass, and in many ways I could see both sides of the debate that followed.  I have strong opinions on the issue when it comes to what's best for our little family, because I've witnessed a beautiful blossoming of faith in Sadie as she's grown, and as her desire for the Eucharist seems to grow every single week.  At the same time I know wonderful Catholic bloggers who wait until their children are older to take them to Mass, who raise amazing faith filled children, and I wouldn't criticize the choices they've made as children before the age of reason are not required to attend Mass and their strategy for teaching their little ones in those early years has worked very well for them.

There was, however, a side in the discussion that made me uneasy (and inspired this post).  There were posts that were adamant that it was simply wrong for children to attend Mass at a young age, particularly as babies.  There was no benefit whatsoever, they insisted, and no reason to do so.  Whatever grace a baby supposedly received was obviously imagined.

And I have to say... I adamantly disagree.  Experience has taught me that the exact opposite is true. 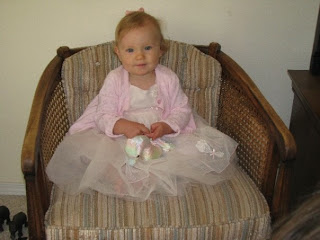 By the time I found out that I was pregnant with Sadie, I'd been Catholic for not quite a year and I was volunteering in our little parish's office, and attending Mass twice a week.  The prayers that surrounded us during that time were amazing.  You see, we lived in an area with a high number of retirees, and our little Church didn't have many families.  As a result, before she was born, Sadie was already the "Church Baby" loved and prayed for by many.  Those prayers were surrounded us as we stumbled through the early days of parenthood.

When she arrived it seemed natural that I'd take her to Mass with me.  While I haven't actually read any books on attachment parenting, the method of parenting I practice most closely resembles what I've heard about it, simply because it made sense to me that my newborn and later infant and toddler, would be with me all the time.  She came along with me everywhere, and spent many a morning in her sling while we were in the parish office after a weekday Mass.  People were happy to see her.  Later, when I did occasionally leave her with Nani while I ran in to Mass (when I was very pregnant with Mae) people were quite disappointed not to visit with her afterwards. 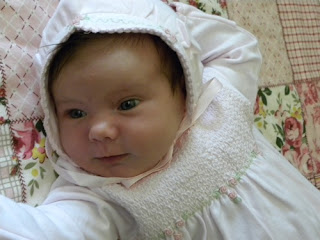 On a practical level, I did see benefits in bringing her along and teaching her that we acted a certain way in Mass, from the very beginning.  Sure I spent plenty of time in the narthex.  I've also spent plenty of time outside the front door, explaining in a serious voice to my now-toddler, that we acted a certain way at Mass, that we were there to see Jesus, and that if we had to go outside we'd be standing looking at the wall, and it wasn't going to be fun.  There was much more to see inside, particularly since we sat up in the front row where she could see everything that was going on.

Now, as a mother who's juggled two little ones at Mass, and watched as they've grown through difficult times, one thing began to become clear to me.  Little ones may not understand exactly what's going on. But still moments arrive when I find myself utterly amazed by what they do notice.  The beauty and love and mystery of what's occurring before their eyes can still touch their little hearts.  And when they're older, like Sadie is, they'll begin to piece together what's happening, with a simple faith that we as adults might well long for. 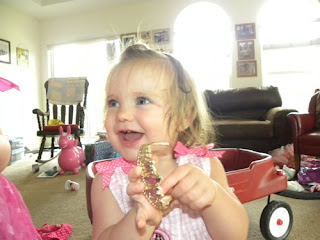 Last week at Mass I was feeling like my regular dizzy, faint self.  It was a High Mass, and I wasn't sure how long Mae would make it for.  Would she make it to the homily?  Probably.  But after that all bets were off.  Now regular readers have probably gotten a pretty good estimation of Mae's personality.  She isn't one of those quiet, compliant toddlers.  Yesterday, while I was writing my blog post, she climbed up on my kitchen counter, retrieved a five pound beg of sugar, and dumped it all over the house (all under Daddy's nose).  Then when we went outside she ran over to roll in a pile of dirt (this I could tolerate) and then threw herself into a thistle bush and then back into the dirt to roll around a bit more (the bath that followed and the sticker picking out from her hair was not enjoyable for either of us).  She's also what you would call "a runner."  If you put her down she takes off and doesn't look back, perfectly confident that someone is following he and keeping her safe.  So good behavior at Mass is not guaranteed.  And with the added length of a high Mass, all bets were off.  It could have been a very long 60+++ minutes.

Instead, for the second week in a row, she sat next to me, holding a small doll and a chaplet, until after communion, when Daddy scooped her up and held her. 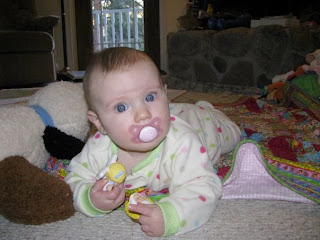 The most amazing moment for me, however, at the consecration, when she looked up, smiled from ear to ear so that her entire face glowed with joy, and began to giggle and clap her hands.  Then she went back to playing with my Saint Philomena chaplet.  That moment, and the pure joy I saw reflected in her little 27 month old face, has stayed with me all week.

At home Sadie showers me with questions.  She loves hearing about Saint Michael.  She demands Saint Therese stories.  When Paul arrived home earlier in the week she announced to him that Jesus had come to earth to open the gates of heaven for us.  Sometimes she'll look at me and say: "I'm not like an angel because I have bones.  I have a body and a soul.  Angels are pure spirits.  I like having bones.  And skin."  Her constant observations and questions amaze me daily.  When we were driving through Wisconsin, seemingly out of nowhere she announced:  "I hate sin!"

And of course, there is the weekly battle before Mass about whether she's old enough to receive, and I frequently catch her with her little outstretched tongue hoping that the priest will forget that she's only four, as she kneels next to me with her little hands pressed together sweetly. 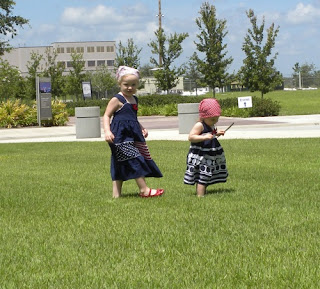 Yes, I guess for me, the value of taking our children to Mass every week is clearly apparent.  Has it been work?  Absolutely.  Have I missed many a beautiful homily and been distracted (or outside) through breathtaking faith filled moments.  Certainly.  Yet, I think, that the moments that have come in place of those moments, are just as much a precious part of my vocation. They are moments that form me, just as they form my children, for they are often the moments when patience is demanded and my  temper is stretched... They are the moment when I am humbled.. and they are the moments that blossom into something beautiful and sacred, as I watch a love for the most blessed sacrament unfold in the hearts of my little ones.

My attention has been imperfect as has theirs.  We've "missed" a lot over the course of the many masses we've attended as a family.  Still, as I watch my little ones and prepare for the baptism of another, I can't help but marvel at what has been given us over the course of these hours that at times have seemed to stretch on and on.

For our family, the question of whether or not to bring our little ones to Mass has been answered...  and I cannot imagine it any other way!
Posted by Cammie Diane at 10:21 AM