A VBAC and Pitocin? 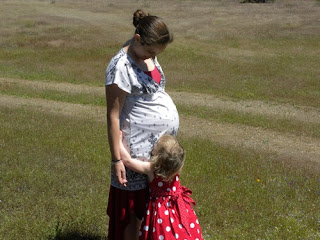 I'm pretty excited at the moment.  Last night, while browsing through information about the hospital I'm supposed to be giving birth at, I found a local site that offers volunteer doula services, that include three visits before the birth and being present to assist at the the birth.  When Paul came in the room I was practically jumping up and down (or I would have been if I hadn't been so incredibly exhausted) and he quickly agreed that I should call this morning.

You see, there's this little part of my conversation with that doctor who isn't my doctor but could potentially be present at the birth of the baby that has been bouncing around in my head these past few days (I don't think it even made it into my 9 Quick Takes last week because there was just too much to remember about that particular conversation).

Towards the end of the conversation I asked him if the hospital, nurses and doctors would be pushing Pitocin on me.  From what I'd always understood, that wasn't something that was recommended for VBACs.  Besides that, I have a very, very, very bad attitude about pitocin, that comes from pushing for five hours without an epidural, with pitocin, and having it accidentally be turned up instead of off for the last hour which resulted in my OB appearing in the room, seeing what had happened, and being furious, and telling the nurse that had made the mistake that she wouldn't be in the OR.

The doctor replied that there's pitocin isn't counter-indicated for VBACs and that "we have to start labor somehow" and pitocin is usually the best way to do it. 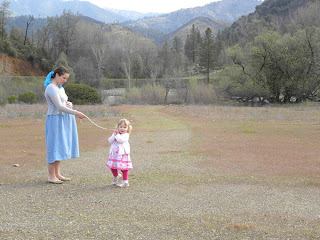 "But," I pointed out, "I've never actually needed pitocin.  I've never been overdue.  I've gone into labor on my own, first on the day before my due date and then at 39 weeks." And honestly with the way the birthing waves are already are going, I'd be shocked if I made it to my due date.  I'll be grateful just to make it to November.

"Well," he responded, "we can't break your water until your at least four centimeters, there's no point, so we use pitocin to start things off."

Apparently the man doesn't realize that if you just wait things tend to "start off" on their own and are more likely to come to a non-slicing conclusion.

"I've been 4 centimeters at 36 weeks with both pregnancies." I pointed out, "and have always gone into labor on my own, before my due date."  I don't say, "I'm probably already at 4 now, since I've been having 'birthing waves' for over a month... real ones... I feel qualified to say, having gone through this three times now..."

"Well, the contractions you'll have with pitocin aren't any stronger than the contractions you'll have without it."  This is where, in a real moment of self control, I don't laugh at him and point out that it's very obvious that he's never had a pitocin drip.  Yes Sir, there is a difference.  A dramatic difference for many women.  And physically there is a difference between your body producing surges of oxytocin and a solid non-stop stream of pitocin entering your blood stream.  The results are not identical.

And so I left the office with the definite feeling that pitocin will very much be pushed on me. 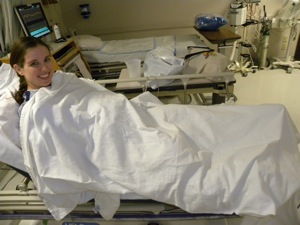 I fully intend to say no (and you know, not to go near that hospital if I'm not having contractions on my own).  But there's a certain type of story that I've heard enough of that gives me pause that involves mom saying no and person giving pitocin giving it anyways.  And while I'm hoping to have a hep lock and not an IV, I dislike the scenario even more that has me, you know, ripping said IV out of my arm, which is what would happen if someone gave me pitocin to "speed things up" at this point (if for some reason I "have to" have an IV).

Which brings me back to my joy at the possibility of having a doula in the room as a third person to back up my decisions and say "no we're not doing that unnecessary intervention for no particular reason."

I'm definitely calling the number this morning, and hopefully setting up an appointment soon.

This whole thing seems to be infinitely more crazy than it has to be... I feel like I'm already fighting to have a natural birth... and I haven't even arrived at the hospital.  But I am excited at the prospect of having additional help that appreciates that interventions aren't always necessary...  and hopefully I'll know more soon!
Posted by Cammie Diane at 9:38 AM