My brain is currently not working at top speed, so this may not be the greatest post ever...  but at the moment hitting the right keys on the keyboard is something of a victory, so here goes:

I spent yesterday offering up prayers for those of you east of us hit by the storm (how are you guys doing?), offering up the feelings associated with having another virus for the third time in three months for the souls in purgatory and generally doing a pretty horrible job not feeling sorry for myself and bugging God about how it doesn't seem like breathing would be too much to ask for while in labor, because I'm really not sure how labor will work with my lungs in their current "Quick Grab Me that Inhaler!" state.

100% of the people who visited me in the hospital ended up getting sick (that would be 5 out of 5 people...).  Everyone in the house was sick as of yesterday, although the girls seem to be on an upswing.  And I really, really wish that there was a cough syrup pregnant women could take that didn't include the word "expectorant" because I'm coughing enough without any extra help, thank you very much. 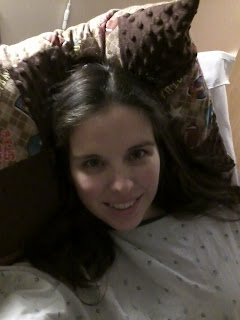 I have been getting a lot done... because laying down is the worst position to be in (even propped up since I kind of need to be on my side 100% of the time these days) and so I avoid it like the plague.  The entire house has been cleaned and organized.  Laundry is caught up.  I'm sending orders out as they come in.  And I managed to sew a minkie and flannel baby snuggler last night for The Boy.  All of this is to avoid the inevitable night time when I will be in bed, not sleeping, feeling mightily tempted by those medicines in my medicine cabinet that actually work on cold/flu symptoms, but that are forbidden pregnant women.

On another note you'd think that, having had been in labor three times now, I would know when it was actually time.  But I don't.  I've been pretty sure that "this is it" pretty much every day this week.  My Hypnobabies book gives 7 signs of pre and early labor and I have 6 out of 7...  so we'll see how much longer this goes on... and maybe they'll let me have a nebulizer in my room during labor...  that's really the best case scenario I'm seeing through my not exactly rose colored glasses at this point.
Posted by Cammie Diane at 9:24 AM