A Long Day and Bedtime Prayers

I spent yesterday wracking my brain trying to figure out what was going on with Maggie.  She didn't want anything to do with therapy and pretty much wanted to spend the day sitting in the corner by herself, occasionally bursting into tears.  Nothing anyone did seem to make it better and I have to admit that I was almost relieved when, just before bedtime, I realized she had a fever and that she must be coming down with whatever has been going around the house.

Whenever we have a day like yesterday I find myself over analyzing what she's eaten, what's going on, what can I do to help her.  Was there gluten?  No.  Casein. Nope.  Is there something new?!?!?! I'll find myself glancing around the kitchen on the verge of a panic attack.

At bedtime she was sobbing when Paul brought her up to her room.  I tucked her favorite blanket around her and laid down next to her and sang to her about her favorite bear stealing her boots, which usually gets a smile.  The crying stopped as she held my hand, but other than that she was silent.  Most nights she'll put her little hands in the air and say "ickle, ickle, ickle!" which means "tickle, tickle, tickle!" because pretending that I am the tickle monster is pretty much the high light of her bedtime routine.

Last night was different though. 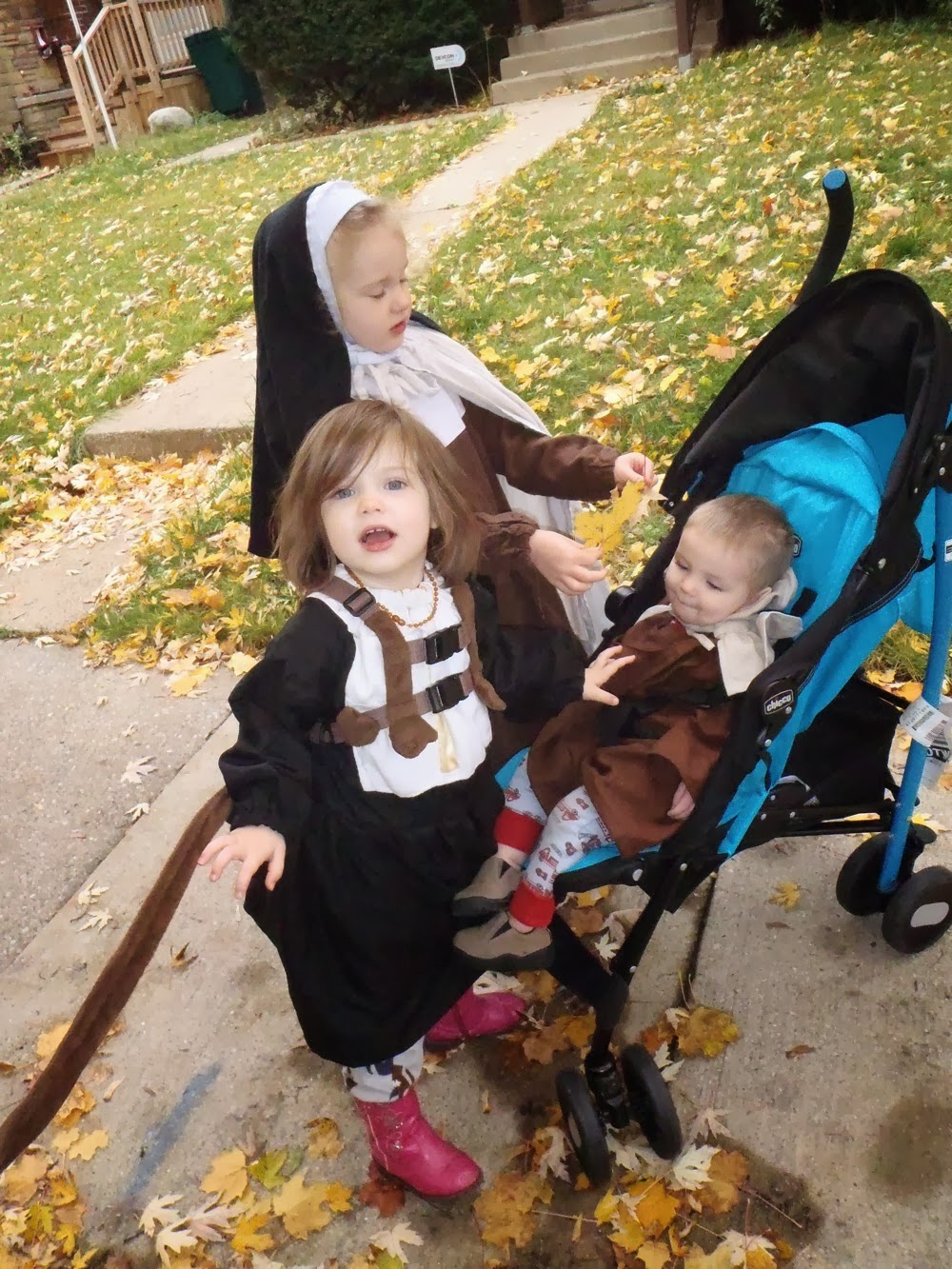 Instead she looked at me very seriously and pressed her little hands together.  I knew instantly what she was asking, because she's been practicing folding her hands when we say little prayers and she looks so proud when she does it.  So I helped her make the sign of the cross and she looked a tiny bit happier when I began to pray the guardian angel prayer.  She kept pressing her little hands together as we prayed one our father, one hail mary and one glory be.

And then I told her a story about rescuing Oatmeal Bear from an imagined adventure and before I left the room she was sound asleep.

As I lay in bed last night, I kept thinking about that moment, and other moments that have stood out lately.

Sadie's faith has always been in the forefront of her words and thoughts.  She talks about God frequently.  When she began to speak one of the first things she told me was that she had to have a "Holy Baby" (nun) dress for her third birthday.

Mae has never showed an outward interest in our faith.  When Sadie and I usually do her religion class, Mae would wander off to play. She had a little Bible that she loved to look at pictures in when she was tiny, but other than that  I was never sure if she was paying attention when we would talk about God.  She was always such a busy little kid, flitting from one activity to another, so I wasn't sure she'd heard a word that I'd said when we'd read the Bible or about the lives of the saints.

Lately though, it seems to have become clearer and clearer that she has been paying attention all along (which really shouldn't surprise me at this point).  Suddenly she's sitting through Mass quietly next to me.  If I try to stay out in the narthex because Patrick is fussing she'll begin to try to open the door to go sit in our usual pew.  And trying to slip away to rush the altar, taking her binkie out of her mouth to convince the priest that she's old enough to receive, and even trying to swipe her own Eucharist a few weeks ago show an interest and longing that I wasn't sure was there yet.  This morning when Sadie and I did our religion class Mae settled down next to us and listened.

And even on days like yesterday, which can feel like a long slow uphill trudge to bedtime (where I know there's at least hope that the next day will be better... and today seems to be headed in that direction), there are still moments like those bedtime prayers, when all of the stress of the day falls away and she finally relaxed into the simple peacefulness of those familiar words as her tiny hands pressed together in prayer before she drifted off to her dreams.