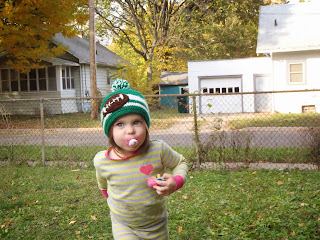 Sometimes I want to write a open letter to waiters and waitresses everywhere.  Okay, just waitresses, and more particularly just a special subset of waitresses, because for some reason waiters don't seem to be super bothered by the topic that's on my mind and thankfully the majority of waitresses don't either.  In fact, most waitresses are super awesome with Maggie.  But it's happened often enough that I'm finally decided that I had to get these thoughts out on the page.

Surprisingly when we do brave taking all three kids out somewhere Maggie usually does fantastically.  The kids loves food.  She gets excited about eating.  And she's usually really excited to be eating out.

She uses a spoon like an expert. It's probably her best small motor skill since it's something she's super motivated to do, so she's not even a messy eater anymore.

But there is one thing that makes her stand out when we're in restaurants and I've found that the reaction of the server can make a huge difference in the dining experience from the moment the topic comes up (while we're being seated) to the moment we leave the restaurant.

I'm not quite sure why, when we asked for two high chairs, you took it as a personal affront.  I know that my daughter is tall.  I know that she looks big, even for her age.  She's really only three, but she's the size of a five year old. 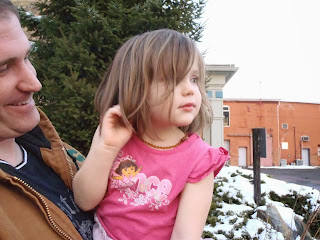 She looks normal, right?  I mean when you're looking at her and she's perfectly quiet and well behaved in her father's arms, you can't tell that there's anything extra special about her, can you?  Sure, maybe her hair is perpetually mused because of her near constant movement and the outfit that she insisted on wearing out, a tutu over her pink penguin sleeper with bright red boots and a cardigan that MUST-be-zipped-up-to-the-very-top-lest-the-world-end stands out, but other than that she looks exactly like every other kid.

Your words, dripping with disapproval, let me know that kids her size shouldn't be in high chairs.

But the thing is, she's not quite like most of the kids you run across.  She's autistic, and while she's made amazing strides in not-running-away-every-time-she's-put-down we still have a long way to go.  If I put her in a high chair she will sit in that high chair and be on her best behavior.  She'll eat every bite on her plate with slow, careful movements (she's always the last one done eating). 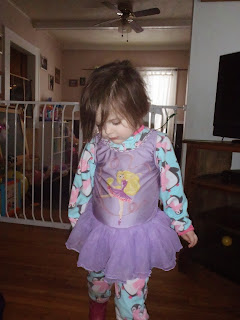 One the other hand if I put her in a normal chair she will spend next hour trying to stand up and climb the blinds so that she can swing from the light fixtures... while screaming cheerfully at the top of her lungs.  And that is not an exaggeration. The sites, the sounds, the smells of your restaurant are just wonderful.  And she'll want to experience them fully, in her own, exuberant way.  She just won't be able to resist their siren call.

We were in your restaurant a couple of weeks ago because, like lots of other people in this city, we hadn't had power in a week.  We stumbled in, looked exhausted, because we were.  And we asked for two high chairs, anxious to sit down and get the kids fed.  "Two?"  You said loudly, your tone disapproving.  "Yes, two." I repeated quietly, trying not to notice that several people had turned to stare.  "I don't think she'll even fit in one of our high chairs."  You continued in a voice that everyone in the restaurant could hear.  "Are they the grey ones that you guys usually have?" I asked.  You nodded.  "Those are the best kind for her.  She'll fit."

And so you slowly and sullenly brought it over.  By that time though, a funny thing had happened.  The other patrons around us seemed to have joined in your disapproval.  Look at the child, so big, who needs a high chair.  It's ridiculous.  The three tables around us were openly glaring when we were seated.  And this wasn't a fancy restaurant.  It was a regional hamburger place.  Not exactly a place that you don't expect to see kids.

Usually people look at Maggie and smile.  Her personality usually inspires that reaction.  But your reaction to our request seemed to rub off on everyone around us.  Who wants to sit by a kid that big who needs a high chair.  Usually people don't notice.  But you'd made it into a big deal and so it became a big deal.

Interestingly enough, she lived up to your expectations.  Our time with you included a special brand of misery not usually present at our meals.  I haven't seen her that wild in a restaurant... well... ever.  Maybe she could sense my stress level as the tables around us stole glances ever few moments, waiting for the behavior that was surely coming to start.  She hardly misses anything, so she probably noticed the glares, and your disapproving tone, as well as I did.  I spent the entire meal managing her behavior.  By the time the meal came I was ready to take it back to our water-less motel and eat it there.

Somehow we made it through and I basically collapsed into my seat when we made it to the van, praying that our power would come back on so that we would never have to eat out again. Ever.

I know, I know, you didn't know.  If she'd had a sign on that screamed "I'm a little bit different" you probably wouldn't have been so obnoxious.  But maybe next time, instead of assuming that a child is being spoiled and that the child's parents deserve to be showered with your disdain, just get the high chair.  It'll make life a lot easier for everyone.

A Mom Who Truly Appreciates a Little Understanding