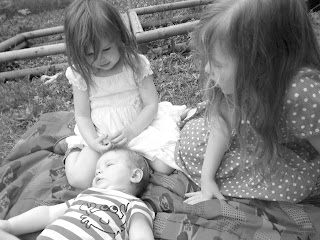 Last night I was up late sewing, watching the slideshow for today's meeting for the study that Mae and I are participating in at the local university.

My head was full of things to remember, techniques that help encourage communication and how I would implement them in our therapy sessions.  I knew that when I read the manual after the slideshow it would become clearer, because when I see the words still on the page they stay with me, instead of skittering off to the place where all the other things I can't quite fit into my overfilled head go these days.

Sometimes its hard to believe that we only got a diagnosis in September.  It's been less than four months.

With so much jammed into those months it feels like a lifetime.

I am so grateful that we've been able to be part of this study.  But even as we move through the steps that are intended to improve the way we communicate (and that have worked amazingly for Mae), even as I watch her learn and progress, the part that I'm the most grateful for is one of the very first steps in the program.

Every single time I use the technique I am blown away by Maggie's reaction.

Imitation.  It seems like such a simple thing. It's not something I would have thought of on my own.

I wanted her to talk.  I tried to draw her out of herself.  But it wasn't working, hadn't been working for the months and years when we were still blundering around in the dark trying to figure out what was going on.

When we were still in the first stages of the study I would watch her in therapy and I would see what her therapists did, but when I tried to copy them she'd look at me like I was crazy and go back to playing by herself.  Or sitting in a chair.  Or staring out the window.

Then we did the section of the program on imitation.  I watched the videos carefully.

So I followed her around.  I copied every gesture, imitated every sound.  After a few moments she stopped what she was doing.  She turned around.  She looked at me.  She really looked at me.  Then she ran over and threw her arms around my neck and kissed me over and over again.  And suddenly it didn't feel like work at all.  It almost instantly became something I look forward to, something that makes the minutes fly by, that we float through as she watches me watching her, a smile on her face.

It took a while to really do any sort of imitation for any length of time, because she would get so excited that all she would want to do was hug me and sit on my lap stare into my eyes.

And all because I stopped trying to get her to do what I thought that she needed to be able to do and started at the place where she was waiting for me (which is probably why this post on one of my favorite blogs feels so amazingly true to me).

We've been learning new techniques.  Some things she picks up right away.  The first time we tried one she stopped, looked me in the eyes and told me what she wanted in a clear little voice. 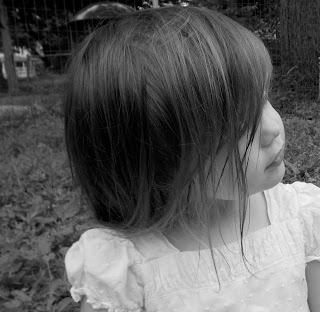 But whenever she starts to struggle we go back to that first lesson on interaction and I start to imitate her.  She may not be interested in what we're doing, may not feel like doing anything at all, but when she sees me imitating her, stomping my feet, touching the gate, squealing, she stops and a slow smile spreads across her face.  Then, after a while, after we've connected and she's watching me, I can add the rest in, try out what we've been learning and most of the time she's suddenly willing to try to reach out and do something new, something that she was adamant that she wouldn't do ten minutes earlier, like get down on the floor and play with me.

Last week I read the packet describing the results of her ADOS-2 results for the first time.  In part it said: She did not respond to her name even when called by her mother.  A social smile could not be elicited.  She displayed poorly modulated eye contact.  She looked at her mother 1-2 times during the evaluation.

Those words come to mind now when we're doing our little therapy sessions.  I think of them when she's staring into my eyes and laughing.  I think of them when I hear her in her room speaking Spanish to her bear, which amazes me every single time I hear her doing it (that really deserves its own post). They spring to mind when she puts up her hands and says "ickle, ickle, ickle" because she wants me to tickler her and when she puts her hands on my hands to tell me that she wants me to sing the itsy bitsy spider.

I didn't know what to expect when we started out on this path, which we hadn't realized that we had already been blundering down for quite a while, but I know that I didn't expect the feeling of joy and amazement that has become a frequent part of our days.  Of course there are still lows.  There are still moments when she's overwhelmed by the world around her and it's all too much.  There are moments when there's nothing I can do that can make it better and my heart breaks for her.  But those moments are rarer and rarer these days and the highs are higher and the thought of them makes it easier to push through the lows.  We've been given so many different tools and together they are doing amazing things.

These days it feels as if the door that was standing between us is open and little by little we've discovered that we can venture through it and invite her out to play and laugh and love.  And more and more I feel as if I glimpsed the beauty of her own little world, which she shares with us more and more each day.

Four months ago I found myself telling the therapists and doctors that she would go months at a time without saying a single word.  Now I hear her walking around the house saying "happy, happy, happy."

Amazed. It's a word that I find myself using so frequently that I almost feel as if I've worn it out, and yet it's one of the only words that I can think of that describes how I feel right now.  Amazed and honored and blessed that this amazing little person, so vibrant and full of life, has been entrusted to us and that we're finally beginning to set aside the ideas of what a three year old "should" be doing so that we can be amazed at the glimpses we've been given these past months into who she really is.
Posted by Cammie Diane at 10:56 AM