This was a big couponing week. My list was three pages long and my stack of coupons was gigantic!
Altogether the total after coupons used and coupons received was $54.83. Ouch! If you've read my posts before you know that the weekly total is usually less than $10 and about half the time I actually make money on my weekly couponing trip. However, I did buy paper towels and detergent and it's hard to get the price down too low on certain useful products (the paper towels and detergent were $30 with coupons!). I've noticed that most of the high value coupons I get are for things that aren't very necessary (how many free air fresheners can they give away each month?). It's harder to find coupons that are more than a dollar for things that you actually need!
There was one thing that I found rather ridiculous when looking at my couponing purchase stretching across the living room. When I added the price of the purchase to the amount I saved in sales and coupons (to get the full price, or what I would have paid if nothing had been on sale and there had been no coupons) it added up to $488.06. And that is ridiculous. There is no way the items in that picture are worth any amount even close to $400 (much less over it).

Now for a couple of my favorite sales (there's still time to rush over to CVS to get these deals!). The Dawn soap below is on sale this week for $.97! And if you can find the coupons from last months P&G coupon book (at least that's what I think that's where I found them...) they're only $.47 each! 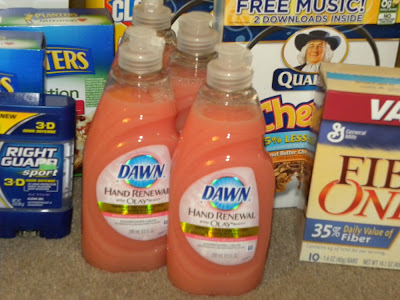 The Chunky Soups below are going to be Paul's lunches when he drives down to The Big City for school. For some reason I usually only get the Healthy Request coupons, but this week I hit the jackpot and had coupons for 20 cans of soup (a handful of different coupons) that were all for the kinds of soups he likes (which also happen to be on sale!). 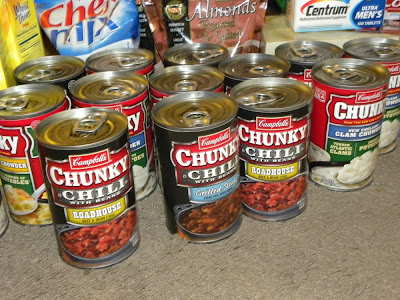 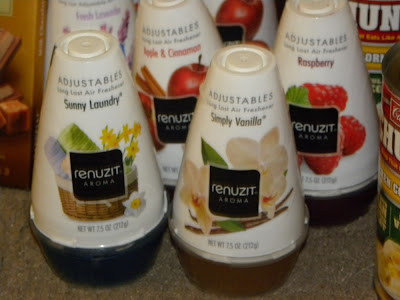 Then there was the couponing drama. I have a very understanding husband... He ended up at CVS 4 times yesterday fixing everything (actually 1 time for work 1 time couponing and twice to fix the mistakes!). Thanks honey!
When we got home from couponing yesterday I got to work scanning my purchase for the National Consumer Panel. One of the best parts about scanning and entering prices is that I've learned how important it is to pay attention to the prices that are charged at pretty much any store. A couple of months ago we noticed that every clearance item we'd bought at Walmart had rung up as full price (unfortunately we were home, an hour away, when we found out). Yesterday we were charged twice for our paper towels and the razors which were supposed to be $2.32 each after ECB back rang up as $11.79. After trying to get the razors to work out (they dropped the price to $9.99, but my coupons were gone because they'd already been used!) I finally just decided it wasn't worth the hassle and returned them. Paul ended up going back to CVS twice before it was worked but it was worth it (there's no way I'm going to pay that much for razor blades!). 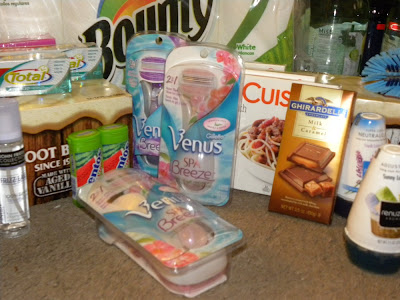 And that is another week of couponing!
Posted by Cammie Diane at 2:34 AM

Email ThisBlogThis!Share to TwitterShare to FacebookShare to Pinterest
Labels: Coupons, Living on a Little