Wonderful News: Archbishop Burke to be made a Cardinal! 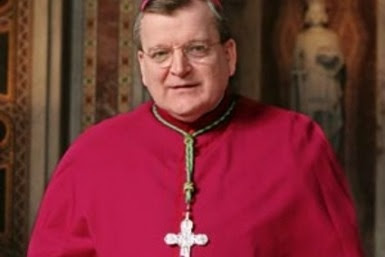 There is some good news today! Paul and I have had a conversation that goes something like this quite a few times:

So I was really excited (despite all the drama going on in our life's at the moment, to see hear this news this morning:

Archbishop Burke says he holds St. Louis so dear to his heart that he kept the title Archbishop Emeritus of St. Louis once he went back to head the Vatican Surpreme Court in 2008.

John Allen with the National Catholic Reporter says Archbishop Burke — at age 62 — will be around for long time at the Vatican.

“That means that Archbishop Burke will have almost two decades as an elector,” Allen explained. “That is, he’s a cardinal eligible to vote for the next pope. He could be one of those rare cardinals who has a chance to vote not just once, but twice on a new pope.”

Email ThisBlogThis!Share to TwitterShare to FacebookShare to Pinterest
Labels: Bishop of the Week, Catholic Culture