The Dangers of Toddler Wrangling

The picture below shows the result of a Time-Out incident from earlier today. While Sadie is 99% over her biting (there were several months where we definitely had a "biting problem" but she hadn't bitten anyone is over a month...) today there was an incident. She had spent the day with the main goal of waking up her sister by shrieking every time she noticed that Maggie had dozed off (after all, Maggie has to be awake to play with her!). After something like a half dozen attempts at waking her sister this way it was time for a time out. Sadie apparently didn't agree with that!
Despite the fact that I was wearing a long sleeved shirt at the time, this was the result: 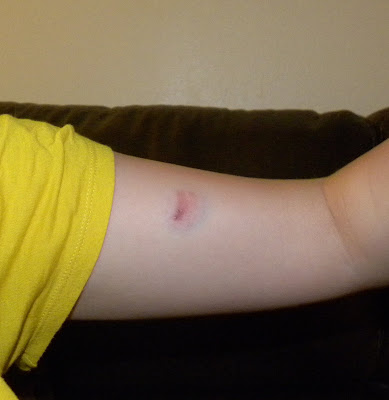