Bishop of the Week: Bishop Kevin Farrell of Dallas, Texas 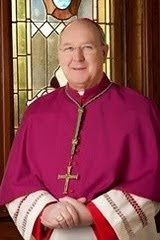 I'm always happy when I see a Bishop standing up for the unborn! And Bishop Kevin Farrell of Dallas, Texas isn't about to let the truth be obscured by a man who seems to have a loose relationship with both the truth and reality (the second part of that claim is based on the very last Charles Curran quote in this post). All the emphasis in the articles below is mine:

"The Rev. Charles Curran is a Catholic priest and ethicist who has long taught at SMU, and who also has a history of tangling with the Vatican over social issues.

He's to give a lecture Thursday at SMU titled "The U.S. Catholic Bishops and Abortion Legislation: A Critique From Within the Church."

An SMU press release says: "Curran's lecture will examine how U.S. Roman Catholic bishops have made opposition to legal abortion their primary social issue, and will challenge the bishops from a theological perspective for claiming too much certitude in their position."

Farrell issued a statement, saying he had become aware of the lecture.

"The act of directly taking an unborn life is wrong and has always been wrong," Farrell said. "This has been the constant teaching of the church."

Near the end of the statement, Farrell said, "I regret that Father Curran has chosen to criticize the position of the bishops of the United States on this matter.""
Entire Article Here.

"Too much certitude?" How can one be too certain that murdering an unborn child is wrong?
After reading comments defending Father Curran I decided to google him and see what I could find that was "in his own words." It further convinced me that Bishop Farrell is absolutely right in clarifying what is true for the people he is charged with shepherding.
Here are a few questions he answered for the Rochester City Newspaper (read the entire interview here):

How can the Catholic Church offer sanctuary for undocumented workers, but not women who choose to have an abortion or two men who want to marry?

"Well, the obvious answer is that we have hierarchical teaching that is against the two things and in favor of the other... You see, we may have to recognize that we don't give enough rights to the fetus. I think we've given too much, but there is still the danger that we might not give enough."

Would the Catholic Church have greater credibility today if it had allowed priests to marry and women to be ordained?

"Oh, yes. I don't think there is any doubt about that anymore. This is a good illustration of how the congregation has gone out way ahead of the church; where people know and understand this. The credibility is lost when they don't see the church making the changes that are obvious."

"There is no doubt, that the strongest opposition to modern liberties and human rights during the 18th, 19th and into the 20th century came from the Roman Catholic Church."

See, this is what happens when our understanding of history comes from such great sources as Monty Python. People like Charles Curran speak and there are people who actually believe that what he's saying reflects some version of reality. I mean seriously, even people who absolutely hate the Catholic Church (unless they're an incredibly paranoid conspiracy theorist) would admit that there have been quite a few "oppositions" to "human rights" far greater than anything that has come from the Church Jesus founded with Peter.
Speaking the truth isn't always popular. But as I've started to look for a "Bishop of the Week" each week I've been heartened by those that I've read about!
Posted by Cammie Diane at 11:05 PM

Email ThisBlogThis!Share to TwitterShare to FacebookShare to Pinterest
Labels: Bishop of the Week