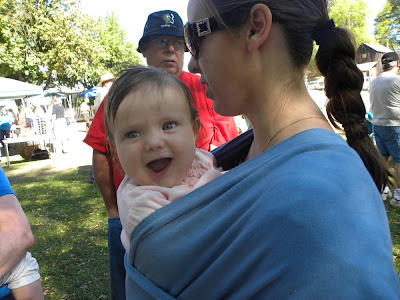 These last couple of weeks I've been running around so much that I haven't had much time to sit down and really think (about anything other than what I need to be doing right now!) or catch up on my Catholic news (or blog) reading. I have been reading a great book that I'm going to review very soon, but other than that (15 whole minutes a day) there hasn't been much down time.
Here's a quick update on what's been going on:
Gigi is still in the hospital and will be for a few more days. He had surgery to fix his broken hip, but they've decided to let his broken shoulder heal on its own. I got to see him yesterday a couple of hours before the surgery. After he gets out of the hospital he'll be at a rehabilitation place for a while (the nurses said a week, the rehabilitation people said a month... we're hoping a week!). Thanks to everyone for the prayers!
Paul started up his final year in his MA theology program this year, and is prayerfully trying to figure out what comes next. He's going to Rome to check out the Angelicum in January, but he's also applying to law schools in the US and studying for his LSATs when he's not studying or writing papers for his classes (or working!). On top of that he had knee surgery earlier this month, so he's been pretty busy lately!
I, however, should be much less busy as of Sunday morning! I've been getting ready for our town's Harvest Festival, crocheting, baking and making rosaries and jewelry (my excuse for this weeks mostly short little posts) for the booth I'll have there. Hopefully I'll have a little more time (and a little more sleep) next week. Now to get some rest before I'm up baking breads tomorrow morning.
Posted by Cammie Diane at 1:28 AM