Bishop of the Week: Bishop Vasa of Baker, Oregon (Again!)

Bishop Vasa is our Bishop of the Week (again!)! 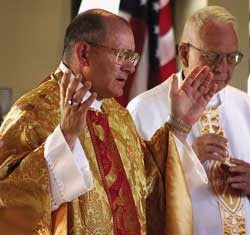 You know you're a Catholic nerd when you and your husband go on one of your very rare lunches out, you bribe the toddler with a small bowl of ice cream and an exciting part of the conversation includes a round of "Who are Your Favorite Bishops!"
I have four or five that instantly come to mind, and Bishop Vasa is always at the top of that list (there may be a tie amongst the top five!). It's a good thing I married a theologian. The conversation began in this way: 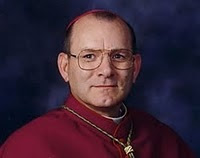 Me: "I think Bishop Vasa is my favorite. Especially when he stood up to the Catholic hospital's in his diocese. But I like Bishop Olmsted a lot too. And Bishop Sample."
Him: "Don't forget about Archbishop Burke."
Me: "But I'm talking about in the U.S... Of course he'd be on the list. And we're lucky to have Bishop Soto here..."
(for the record Paul's favorites include Bishop Olmsted, Archbishop Burke and Bishop D'Arcy)
Every time I read about something Bishop Vasa has done it makes me smile. The article below is just the latest.
It published by lifesitenews last month and is definitely worth reading in its entirety. Here are some of the highlights (there are so many it was hard to narrow it down):

"The authority of the Catholic bishop within his own diocese trumps the national bishops’ conference and "no bishop has an obligation" to adopt the conference’s documents, asserted Bishop Robert Vasa of Baker, Oregon in a landmark talk last week.

"...According to Bishop Vasa, statements from bishops’ conferences necessarily tend to be "flattened" and "vague," allowing certain teachings to "fall by the wayside through what could be called, charitably, a kind of benign pastoral neglect."

While some call this compassion, “in truth, it often entails a complicity or a compromise with evil,” he says. “The harder and less popular teachings are left largely unspoken, thereby implicitly giving tacit approval to erroneous or misleading theological opinions.”

"I fear that there has been such a steady diet of such flattened documents that anything issued by individual bishops that contains some element of strength,” he says, “is readily and roundly condemned or simply dismissed as being out of touch with the conference or in conflict with what other bishops might do..."

"...According to Bishop Vasa, pastoral documents “are open to a broad range of interpretation and misinterpretation. ... A charge could be brought that such documents are intentionally vague and misleading.”

“While I have had an occasional suspicion of this myself, it would be a serious defect of charity on my part to speculate about whether this is actually the case,” he continued. “I would say that the vagueness, whether intentional or not, has occasionally been a cause of concern and even consternation.”

While he says the conference is “both practical and desirable” for communication and joint efforts such as liturgical translations and disaster relief, Bishop Vasa notes there is “room for concern about the tendency of the conference to take on a life of its own and to begin to replace or displace the proper role of individual bishops, even in their own dioceses.”

“It is easy to forget that the conference is the vehicle to assist bishops in cooperating with each other and not a separate regulatory commission,” he added. Further, he noted that “there may also be an unfortunate tendency on the part of bishops to abdicate to the conference a portion of their episcopal role and duty.”

Compared to the “flattened documents” that often result from "the search for consensus,” statements from individual bishops, he says, "are often stronger, bolder, more decisive, and thus more likely to be criticized as harsh and insensitive."

Gentle appeals have their place, he says, “but when constant appeal produces absolutely no movement toward self-correction, reform or conversion, then reproving and correcting, become necessary.”

“At some point, there needs to be a bold resistance to the powers of the world in defense of the flock,” he continues. “The fear of offending one contemptuously dissident member of the flock often redounds to a failure to defend the flock. It can redound to a failure to teach the truth.”

“Fortunately, courage is contagious,” he notes, pointing to the examples of courage provided by prelates such as Archbishop Raymond Burke, and Bishops Joseph Martino, Thomas Tobin, Thomas Olmsted, and Fabian Bruskewitz. “These men all encourage you, and they encourage me as well,” he says.

“On the issues of life and marriage, many Catholics want a strong voice and one that is prophetic,” said Deal Hudson. “They don’t want the voice of some committee trying to be diplomatic to everybody.”

Photo from InsideCatholic.com.
Posted by Cammie Diane at 1:26 AM

Email ThisBlogThis!Share to TwitterShare to FacebookShare to Pinterest
Labels: Bishop of the Week, Catholic Culture, USCCB