Bishop of the Week: Bishop Olmsted of the Diocese of Phoenix

"We cannot take the life of an innocent human being."
-Bishop Olmsted 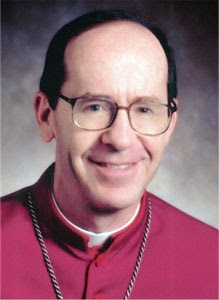 The announcement that many have been expecting to come this week was made today, when Bishop Olmsted of the Diocese of Phoenix stripped Saint Joseph's Hospital of it's Catholic status. Saint Joseph's "Catholic" status first came into the public spotlight when a direct abortion was performed there last year:

"Bishop Thomas Olmsted of Phoenix, Az. announced in a news conference Tuesday morning that St. Joseph’s Hospital was no longer Catholic after it refused to comply with the bishop’s terms, which included renouncing the direct killing of an unborn baby of a woman suffering from pulmonary hypertension, at 11 weeks gestation.

Olmsted said that, “Communication with leadership at St. Joseph’s Hospital and Catholic Healthcare West has only eroded my confidence about their commitment to the church’s ethical and religious directives for health care,” according to local news reports.

“They have not addressed in an adequate manner the scandal caused by the abortion,” said the bishop. “Moreover, I have recently learned that many other violations of the ethical and religious directives have been taking place at Catholic Healthcare West facilities in Arizona throughout my seven years as bishop of Phoenix and far longer.”"

The Bishop also stated that he had recently learned that St. Joseph's (and Catholic Healthcare West) "administered contraceptives, performed sterilizations, and conducted other direct abortions..."
This got me thinking. I know that sterilizations are performed at our local Catholic Healthcare West Hospital because my OB asked me a couple of months before Maggie was born if she should tie my tubes since I'd already be open for the C-section (conveniently asked at one of the few appointments my husband wasn't able to make). And that would be at a "Catholic" hospital in the diocese of Sacramento (more specifically a Catholic Healthcare West Hospital). I would love to see Bishop Soto follow Bishop Olmsted's (and Bishop Vasa previously) lead on this and tell the Catholic hospitals to start acting like Catholic hospital's that respect Church teachings or to drop the act and stop pretending to be something they're not. I think I have a letter (on several subjects... but primarily this one...) that needs to be written.
Posted by Cammie Diane at 6:47 PM

Email ThisBlogThis!Share to TwitterShare to FacebookShare to Pinterest
Labels: abortion, Bishop of the Week