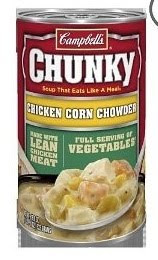 I’ve come up with a quick soup that I make when taking something frozen out for dinner has completely slipped my mind and we don’t have an hour and a half left to cook one of my frozen casseroles (and I’m feeling too tired to whip something up from scratch). We have quite a few types of Campbell’s soups in our garage that Paul takes with him when he goes down to school for the weekends.

I tried his favorite, Campbell’s Chunky Chicken Clam Chowder, but found it to be a little bland (Paul suggests that my love for all things spicy has killed off my appreciation of less strong flavors). After playing around in the kitchen for a short amount of time I came up with a solution that we both like and we’ve had it several times now. It’s a quick family favorite.

I take two cans off Campbell’s Chunky Chicken Corn Chowder and put them on low heat in a large saucepan (I know I’ve mentioned this with other recipes, but the “low” heat on my oven tends to scald quite a few dishes if I’m not constantly stirring, so this might be “medium” on other stoves). I start the modification process by adding a can of sweet corn (drained).

Then it’s time to work on the flavor. I add a large scoop (with a regular sized spoon) of chopped garlic and generous sprinklings of garlic powder, oregano and basil (my three favorite herbs!). I would estimate the “sprinkling” amounts to be in the 1+ tbs range (okay, probably closer to 2+ to 3). Then I add a pinch (or three) of kosher salt. The finishing touch is half of a chopped onion and voila: a tasty, quick meal (especially when served with French bread!).

I love soup! We probably have nearly a months worth of homemade frozen soup in the freezer at this point, and while this may not beat any of my favorite homemade soup recipes (potato soup, split pea soup and cheddar broccoli soup) it comes in pretty close (and isn’t nearly as time consuming as any of those three recipes!).

As a side note, when I googled the soup to make sure of the name (and find a picture, which, by the way, is from amazon) I had no idea that you can buy soups on Amazon. But there’s a ton of them! They really do sell everything now, don’t they?
Posted by Cammie Diane at 12:01 AM