The Dominican Sisters of St. Cecilia 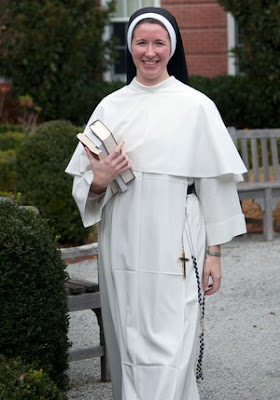 I just finished reading a wonderful story (that I was somewhat surprised to see on NPR). I've included a few of the highlights, but it's really worth it to read the entire thing on the NPR site:

"For the most part, these are grim days for Catholic nuns. Convents are closing, nuns are aging and there are relatively few new recruits. But something startling is happening in Nashville, Tenn. The Dominican Sisters of St. Cecilia are seeing a boom in new young sisters: Twenty-seven joined this year and 90 entered over the past five years.

The average of new entrants here is 23. And overall, the average age of the Nashville Dominicans is 36 — four decades younger than the average nun nationwide.

Unlike many older sisters in previous generations, who wear street clothes and live alone, the Nashville Dominicans wear traditional habits and adhere to a strict life of prayer, teaching and silence."

"It's a mysterious call to what they describe as a love relationship with Jesus. And for them it is literal: They consider the white habit a wedding gown.

"It's beautiful, and it's a reminder that you are a spouse of Christ," says Sister Mara Rose McDonnell. But it's more than that.

"It tells others that there's a reality beyond this world. There's heaven. We're all orienting ourselves towards heaven," she says.

To the world, the habit is the most visible symbol of their commitment — one they all acknowledge exacts a price."

""Our generation is thirsting for orthodoxy," she says. "And I know it because I've seen it in university settings. I've seen how young people ... love JP2 not only because he was a nice-looking old man and he gave great hugs or something — but because what he spoke and wrote was the truth and it spoke to their hearts.""

"But what about doubt? I ask Clark, "Do you think you'll have any regrets?" She pauses, then shakes her head slowly.

"I met the person for me," she says. "I've been known by him forever. And I've known him more or less throughout my life. And now I know that this is where I'm called to.""