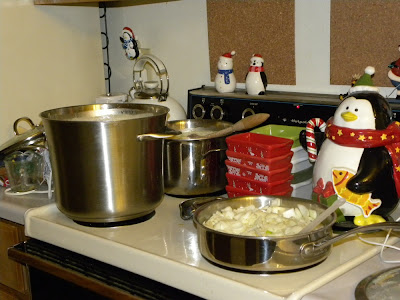 Today I took a recipe I've posted before and improved on it! It is now a new family favorite (also a big time Sadie Favorite!)!

You see, we were out of our freezer supply of my broccoli and cheese soup, but I hadn't been able to find the cheese that I used last time (or any processed cheese that I liked at all... bad processed cheese is an quick way to ruin an otherwise good recipe).
So I decided to make my own cheese sauce. I was a little nervous about how it would turn out. I actually put one of my eggplant lasagnas in the oven just in case it was a disaster. I figured if it wasn't a disaster we could have it for dinner tomorrow night. Instead, it was so good, we ended up having the soup with the lasagna (which was great because we fed Sadie before tonight's vigil Mass and planned on eating after the girls went to sleep... and then they decided that they just weren't tired... so we were starving by the time we were finally able to eat a little while ago!).
This recipe is huge! You'll need at least one large stock pot (probably two). This recipe made 11 nights worth of dinners for us (a family of four, three of who eat solids!). So that's about 33 servings (probably a little more since I tend to overestimate how much I need). Our freezer is stocked with soups now! Here's the recipe:

Grate cheese and set aside.

In large stock pot melt the butter. Add the chopped garlic. Cook for 2-3 minutes. Whisk in 1 cup of flour. Add 10 cups of milk. Add 2.5 cups of chicken broth. Once the sauce is thick enough to coat back of spoon add the cheese.

After the cheese has melted add the evaporated milk, the cream of mushroom and the cream of broccoli. Stir and let the soup simmer until combined- this doesn’t take very long (I kept my oven at warm, but my oven is ancient and soup has been known to burn on the low setting).

Saute onions in a separate pan. Add onions and broccoli. Simmer until the broccoli is done (mine simmered all afternoon, but it was actually probably cooked after an hour).
Enjoy!
Posted by Cammie Diane at 11:48 PM

Email ThisBlogThis!Share to TwitterShare to FacebookShare to Pinterest
Labels: recipes, Recipes for Toddlers