It's been a little stressful not knowing where we'll end up next.
Over the past couple of years we've prayed about the next step that we'll be taking quite a bit. I prayed that the direction that we should take would be made clear and in the end that prayer was most definitely answered. It couldn't have been much clearer.
And so it's time for the announcement you've all been waiting for (okay... in reality it's just the announcement I've been waiting to be able to make!)... Next autumn fall will begin his studies at....
Ave Maria University! 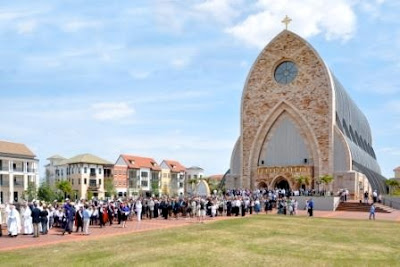 I am so incredibly excited to be headed to a community that's known for being authentically Catholic and loyal to the Church! I would have been really excited to end up in Saint Louis or in D.C. too, but Ave has kind of been a dream school of mine (I know, I know, I'm not the one who's going to be going there!).
Now Paul just has to finish his thesis. I finished proofreading a draft last night (58 pages) but I think he may be adding more to it now. It's a really interesting read, about the Passion... but I'll be thrilled when it's finished and his Masters is completed!
Photo from the Ave Maria website.
Posted by Cammie Diane at 11:18 PM