Yesterday morning when I was getting dressed Sadie ran into the room like a mini-hurricane intent on rushing me out into the living room. To distract her from climbing up and jumping on the bed I asked her what I should wear. She instantly came to the edge of the bed and said "Turtle Bay Dress!" Now she's told me she wants me to wear my "Turtle Bay Dress" before but I always just thought she was being silly, because Turtle Bay is a park we sometimes visit when we go to "The City" with Nani and Grumpa and so I just assumed by saying "Turtle Bay Dress" that she was asking to go to Turtle Bay.
This time though, I asked her which dress that was (expecting a random answer) and she carefully glanced at my skirts and pulled on this one (I already had the white top in my hand):

I didn't immediately make the connection, but after a moment it came to me. When she was around 14 months old we went to Turtle Bay for their big Birds and Butterflies exhibit, where they have an aviary full of birds and a separate butterfly house. Apparently that moment was pretty big in Sadie's life because I was wearing the same outfit on that day back in September of 2009 and it is now my "Turtle Bay Dress."
We have pictures of the day in her photo albums, but she's hardly touched those in the past year! Here are a couple of my favorites: 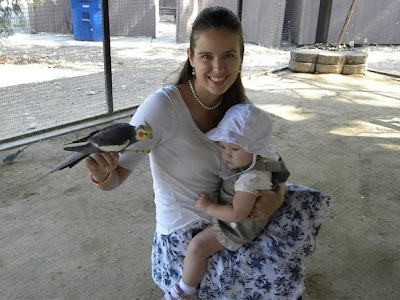 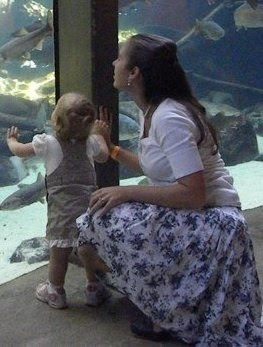