We had a lovely, extra busy weekend (this weekend ran from Thursday to now because of Paul's graduation and is the reason I wasn't blogging!) but I am very glad to be home. Paul graduated with his MA in Theology on Friday afternoon. Here are a few (okay, a lot of!) highlights from the weekend:
The weekend began on Thursday when we set out early in the morning so that Paul could go to his graduation Mass. Unfortunately by the time we got to the school Mae had spent a solid five plus hours in the car and after five minutes in the chapel made it clear in no uncertain terms that she wasn't having it (Sadie had gone ahead to the hotel with Nani and Grumpa). So Mae and I ended up outside on the green before Mass started.
As a sidenote: If you go to a school that calls itself "the most liberal school in the country" and wear a headcovering to Mass (even an unobtrusive snood) you will be seen as so bizarre that people will not be able to help but stare... however the 50+ girls who are wearing super-teeny-tiny-mini-skirts will be the norm and no one will bat an eye (a pregnant woman in a mini dress literally came centimeters away from flashing us as she was getting into the pew... the dress was, disturbingly, really that short...). 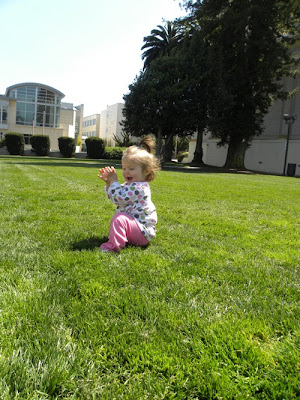 Mae decided to test her limits while we were outside waiting for Daddy (and getting her wiggles out). And I decided to see how daring she would be. Pretty daring. Although she got about fifty feet away from me and made a huge circle in what looked to be an attempt to sneak up behind me and steal my chaplet book out of my bag. Unfortunately for Mae her clever sneak attack did not work out... 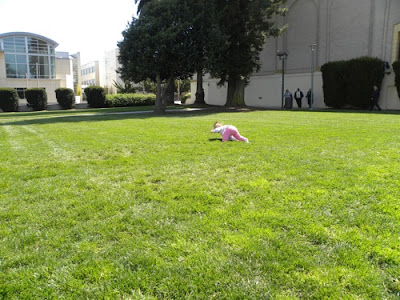 This is actually Sadie's second carousel ride of the night. She'd already gone on this carousel (at Pier 39) once with Nani while we waited for dinner. She could hardly stop talking about the zebra until... 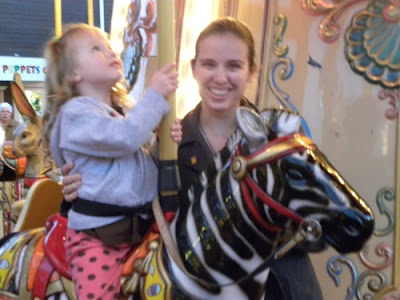 She saw the giraffe. Ride #3 was on the giraffe at the carousel in Golden Gate Park the next morning. And thus began our weekend of Merry-Go-Rounds... 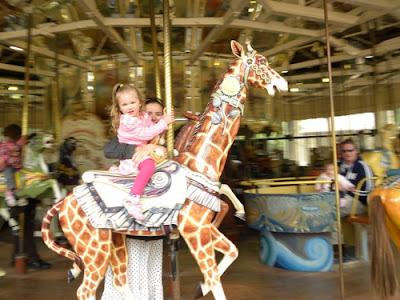 After we went on the carousel, Mae enjoyed a ride on the swing (although she hated the sand box and clung to me when we had to walk over the sand after Daddy had been silly enough to suggest she might enjoy playing in it). 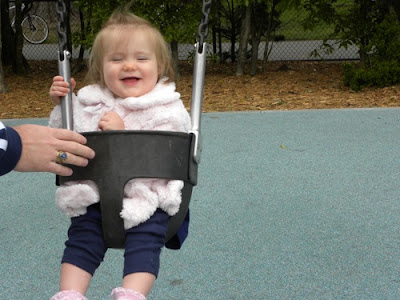 Sadie climbed a cement wall shaped like a wave (with a bunch of ten year old boys) while I hovered near-by, rode on a pelican, went down every slide she could climb up to, and said "Hi!" to every kid that walked past her. Unfortunately we discovered that we weren't trendy enough for many of the mom's to be friendly too... but that is another post... 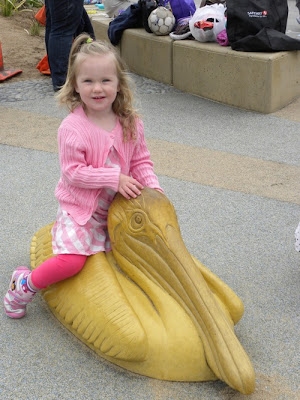 Then we went back to the carousel... This time Sadie picked the tiger. I think she was attempting to ride every single animal at the zoo that we were going to see. In the end this carousel was my favorite off all the carousels we rode on in San Francisco. 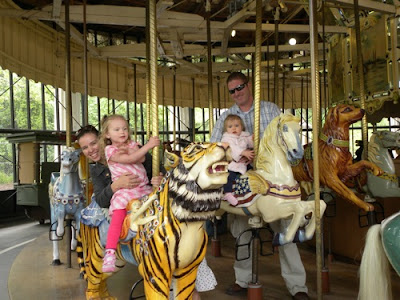 After we left the park we grabbed a quick lunch at Mel's diner and then headed over to the school to find parking and wait for the chapel to open to get seats. Mae and Sadie decided that while we were waiting for the doors to open it was the perfect time to hold a wrestling match. Mae won (as she tends to do). And gave Sadie plenty of slobbery baby kisses. 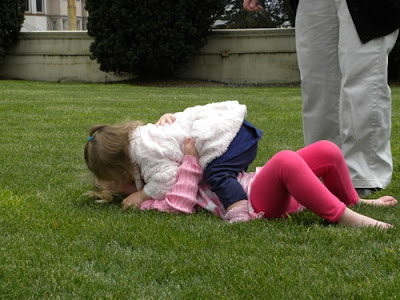 Sadie may have been defeated because of the simple fact that she couldn't stop giggling. And because she's so gentle and good with her baby sister! 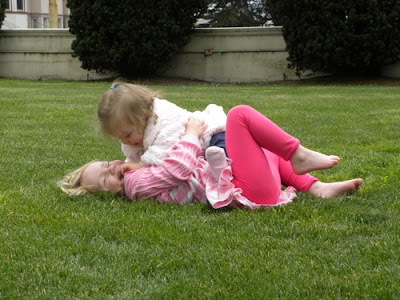 It was finally time to go inside. The chapel was beautiful... I loved the garlands that they had hung as decorations. And the gallery even had an appropriate theme (although the loss of the majority of the confessionals still makes me sad) 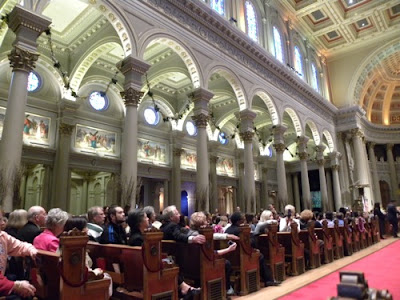 Here's a blurry picture of Paul beginning to walk across the stage to collect his diploma. My camera just wasn't working very well with the lighting and the distance. Paul is the one with the red-lined hood on the right side of the stage. 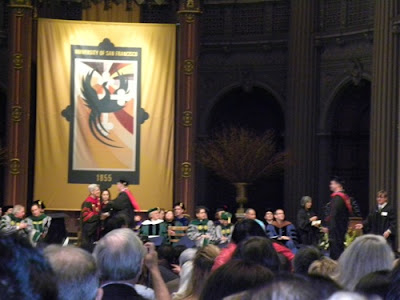 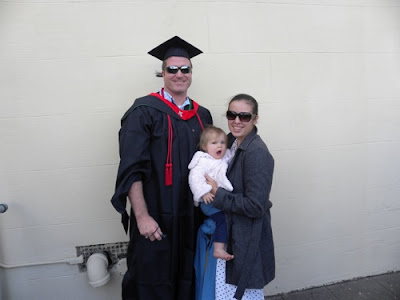 Our attempt at a family picture. Unfortunately Sadie was much to busy to be bothered with holding still for any length of time. It is fairly typical of our family pictures these days. 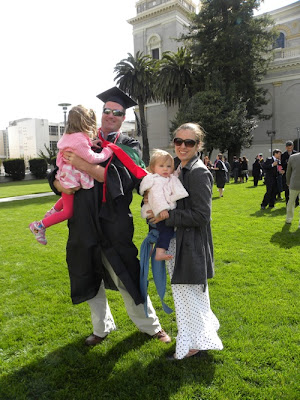 Even Holy Baby was exhausted from all everything that had been going on. After a quick visit to the reception she lay down on the grass and had a break while Sadie continued to run amok. 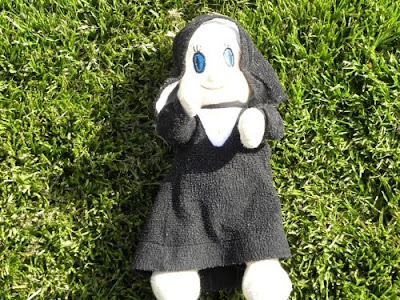 Daddy spent a little more time visiting in the reception hall. Sadie was running wild when she spotted him as he walked out to find us. She was insisting that if Mae got to be barefoot she did as well! 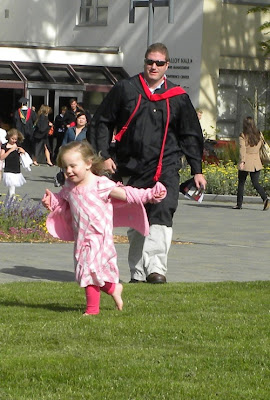 She'd been told that if she took her sweater off she would have to go back to the car (otherwise she would have been prancing around in as little as she could have and it was very windy!). So when she took off her sweater it was a pretty good sign that she was done for the day and ready to crash. 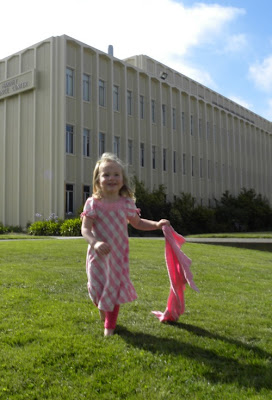 Today was our last day and was also pretty busy. After breakfast we headed with the girls to the zoo. In this picture Sadie is lobbying to be allowed to ride a giraffe. She's quite hopeful that we're going to say yes. 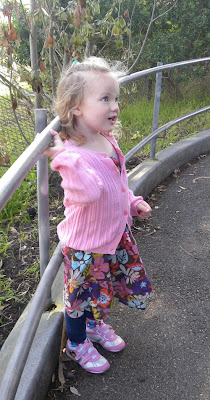 Little do we know that storm clouds were on the horizon (Sadie storm clouds) when this picture was snapped. When we moved on from the bronze lion statue a giant tantrum ensued. Sadie would have spent her entire day laying here with the bronze lion cubs... 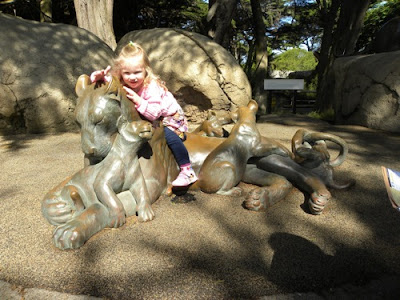 Here Mae gets to see Hasani, the baby gorilla, at the zoo. He is two years old and 35 pounds. Sadie just got measured this week and weighed in at 38 lbs and was 39 1/4 inches tall! 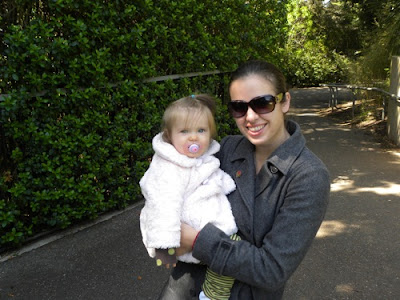 Did you know that the zoo had a carousel? There are so many carousel's in San Francisco. Nani and Grumpa had bought Sadie two tickets, but then... Mae didn't want to go on it... so Sadie had extra tickets... which meant lots of rides... First we rode the giraffe (I guess she did get to ride a giraffe after all!): 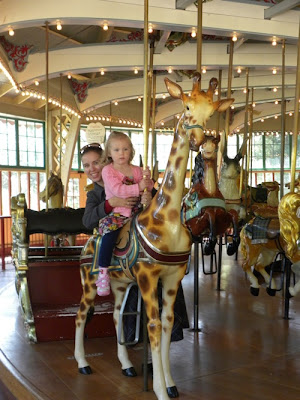 Mae was convinced to take one ride with Daddy. She rode the stationary lion. 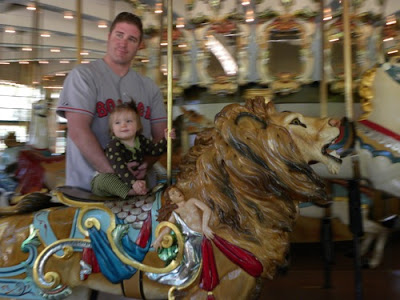 Then Sadie rode the cat (which she called Dee after "her cat." Lastly she rode the "white tailed deer" with Grumpa. (even though he didn't have a white tail... the deer on a Diego episode we have on DVD does). We named the deer "Tucker" after one of the deer that has frequented Nani's garden for years. 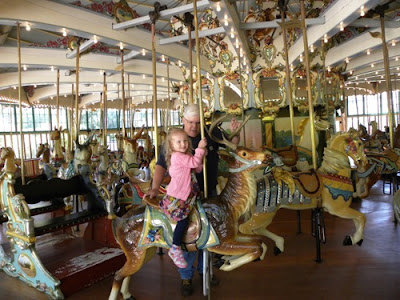 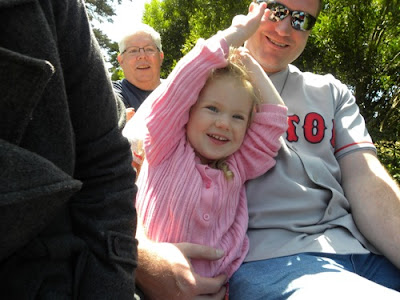 And then we got in the car (around noon) and drove! We arrived home right around seven pm. We did note a little after six that the world had not ended! And that was our very long, but very fun early weekend!
Posted by Cammie Diane at 1:04 AM