Years before my conversion, when I was attending the CINO college that’s my alma mater, I remember my friends and I making quite a few jokes about “Catholic Guilt.”  It seemed as if it were very much a reality in the lives of the Catholic students that we knew (at least for those who felt any sort of attachment to their faith) and we imagined that all Catholics were that way, weighed down by impossible standards and expectations.

Needless to say, I was rather surprised when, throughout the process of my conversion, I found that rather than feeling weighed down by thoughts of my faults and failings, I felt surprisingly free.  Sure there have been (and certainly will be again) days when I really, really didn’t feel like going to confession, but I began to realize that the days when I didn’t want to go to confession, were the days that I most needed to go.  Over time the knowledge of how much easier life was when I did regularly manage to receive that particular sacrament has been, for the most part, motivation enough.

I know there are still people out there who share my youthful misconception that Catholics think about sin all the time.  Some would suggest that by teaching our children about the faith, we’re impressing restrictive ideas about sin upon them and ruining their childhood (more inspiration from my forum conversation earlier in the week… see that’s one reason why I stay on the forums.  Inspiration.).  But if these critics spent a day in an average (practicing) Catholic home I think they’d be surprised.

They’d see that most Catholic moms are kept pretty busy trying to impart the wonders of our beautiful faith to our children. 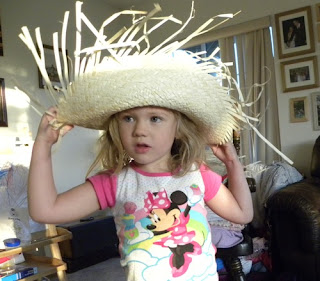 In our little home, in the morning we wake up and start our day pretty early.  At some point in I try remember to say morning prayers with the girls.  Sometimes that’s at 7 and sometimes it’s not until 10.  Some mornings I’ll start to say them on my own, while they play, but they usually come over to sit next to me and to climb on me and Sadie inevitably looks at the cover of the book and says: “It’s our bedtime book!” and then ignores me when I say that it’s our “morning book” too.

The thing that I love about the morning prayers is how joyous they are.  And when you start the day with Lauds the rest of the day just seems to be a little more beautiful.

The thing is, when kids spend most of your time learning about the greatness of God, there isn’t much time to impart shame or guilt, despite what the misinformed might think.  So we teach them to love what is good and pray that it will be enough.

Certainly the topic of sin will become more prevalent as the girls get older and as they’re ready to tackle more difficult concepts.  We live in a fallen world and it’s part of life.  Our children need to be prepared for what they’ll face outside in the great big world, as we send them out into the fray, along with our fervent prayers that they’ll make the right decisions.  But that doesn’t mean we’re hammering “shame” and “guilt” into their heads. It means that we’re attempting to do all that we can to prepare them to live in a way that’s pleasing to God and then we step back, pray that they’re open to God’s grace and that the lessons of their childhood were truly understood and that those lessons are embraced. 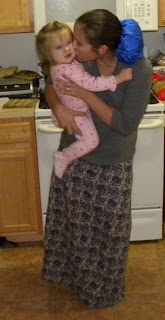 From what I’ve seen I think that oftentimes those childhood lessons are forgotten for a time, but resurface later, in adulthood, when adult children begin to raise their only families and begin to revisit their own memories of childhood.

While sin is an inevitable part of our world, the long-term guilt that can accompany it is not.  For we decide, every day, every moment even, whether we’ll embrace the joy or reject it in turning from God.  It’s as simple as that.  Each moment is a chance to turn towards God, or to turn away from Him.

Sadie already knows that she dislikes the snake on Jesse Tree ornament, and is constantly pawning it off on her little sister, who isn’t that fond of it either, despite my attempts at making it as pretty as the other ornaments with those red velvet apples.

Will I be telling my children that right is right and wrong is wrong?  Absolutely.  I don’t think I’d be doing them any favors by imparting the morally relativistic morality that everyone can do whatever you want and it’s all okay.  Their souls are a tad more important that seeming hip and up with whatever it’s trendy to believe at the moment.  As they grow, like so many parents and family members, I’ll continue to pray and pray and pray that it all sinks in and that they are open to God’s grace in their lives.

You see, the mistake that I made in my earliest understanding of the Catholics that I knew was assuming that the guilt they felt was a byproduct of Catholicism.  In actuality that sort of burden (when it’s not the result of scrupulosity) is usually the result of living in a way that we know we shouldn’t be living.  I’d say it would have been exceedingly hard for the kids I knew at CINO college not to struggle with what was commonly accepted as normal after being raised in Catholic homes.   But that’s not the fault of the homes they were raised in.  It’s the fault of a college that ‘embraced a secular world view and rejected it’s Catholic identity and duty to shape minds and hearts.

The standards that we innately know we’re supposed to be striving for aren’t impossible, when we’re open to His grace.  And as long as we keep picking ourselves up and going to confession with the real intent to try to be better, the natural guilt that we should feel when we’ve done something wrong (for guilt is not a bad thing when it tells us that we’re wrong and need to make a change) is quickly dispelled and replaced with the joy that God is loving, even in the midst of difficulties.
Posted by Cammie Diane at 7:35 AM