An Unexpected Side Effect 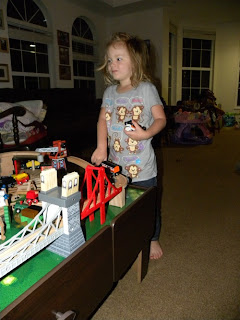 Last night I was all ready to write a new post.  I'd sewed a half dozen snoods and a convertible scarf/headband and had taken the progesterone supplement (prometrium) that I've started, just in case the girls woke up and I ended up falling asleep waiting for them to go back to sleep.  I thought I'd sew a couple more snoods and get to blogging.  Then the dizziness started.  At first I thought it was a migraine aura, because the aura usually hits with slurred speech and dizziness before  the actual migraine.  But as things got stranger I began to wonder.

Anyone who saw me would have likely thought I'd had a few too many glasses of wine.  When I stumbled into the bedroom to put the sewing machine away (because I didn't even think to ask for help... that's definitely a flaw sober or not!) Paul suggested that I get some sleep.  But I decided to google the side effects of prometrium and apparently feeling really, really drunk is one of them that a lot of women are asking about online.  I have to say I was surprised.  I mean, I know hormones can really effect the way we think, but I was surprised it was that dramatic.  Paul suggested that a drunken sounding post was probably not the best idea and I finally agreed and went to sleep.

But I did have a Sadie story to share today:

Sadie was in fine form yesterday.  She and Mae "helped" me put together the dress form that I found at Joann's on Friday.  I'd been waiting for about five months for a great dress form sale and when I walked through the door to do a little fabric shopping for snoods I was pretty excited to see that all dress forms were marked down to $99 (plus a 25% off everything coupon that I had).  Since the dress form easily could have run around $250 I was pretty sure I wasn't going to be able to beat the deal and so I finally made the purchase (along with some great fabric deals... I can not pass up fabric that's $1.49 a yard...).

So yesterday I managed to assemble the dress form, despite my helpers' best efforts, and then began to adjust the measurements to match my own.  Sadie was on hand to ask lots of questions about what I was going and quickly realized I was adjusting the figure to Mommy's size.  Which is around the time she started calling the dress form "real Mommy."  The dress figure got quite a few hugs.  And later when I attempted to put "Real Mommy" away there was panic (to condense an hour of conversation).  "Where is my Real Mommy?!?!? Is she in the hallway?!?!?  Real Mommy?!?!  Real Mommy where are you!??!"

I finally brought "Real Mommy" back out and Sadie attempted to stuff, not one but two baby dolls in "Real Mommy's" tummy to give her a baby bump.  And she tried to make her hold her backpack, which was tough on Real Mommy without limbs of any sort.