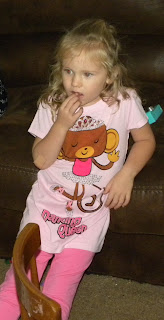 We did our Thanksgiving shopping at Walmart today, along with what felt like every other family in the immediate vicinity.  I don't know how the store can be so crowded.  There's at least one Walmart off of every freeway exit around us.  There's one on the major road south of where we live and there's one a block north.  If you go west a few major roads there's another Walmart there.  They pop up every few miles, in giant sprawling super stores.  And they're brimming with people whenever we go.

As we filed down aisle after aisle in a train-like row of carts, with traffic jams likely anytime anyone paused, Sadie paused her attempts of twirling, escaping holding hands, and jumping up before landing and giving me a good hard yank, to look behind us.  She noticed the line.  Thus began the following conversation:

Our Walmart shopping trip wasn't just for food though.  I realized upon going through the girls' closet that Sadie had no pants above a size 4.  She's a size 6 now.  Since it is starting to cool off, and since we've apparently adjusted to the tropical weather (at least we've kind of adjusted) and 65 feels pretty cold after three months of 85+ with 100% humidity, I decided we needed to buy her a few pairs of pants, on the off chance that it someday falls below 70 degrees during the day. 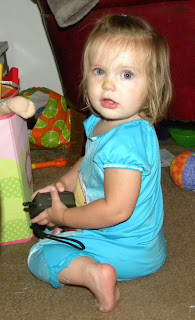 We picked out three pairs of Walmart's $5 stretch pants and three of their long t-shirts (in size 7-8 so Sadie doesn't outgrow them in a month).  Sadie thinks they're pretty great pajamas.  However I'm not sure I'll convince her to wear them out of the house for anything other than running.  On of Sadie's new favorite activities is going for a run.  I'm thinking of trying to start each day this way, to help Sadie burn off a little extra energy.  Since she was "exercising" (her words: "I want to exercise with you Mommy! Are you exercising Mommy?) she agreed to wear shorts and a t-shirt (I managed to find two that kind of fit).  But as soon as we arrived home she came and found me with a dress and announced that she was ready to be a princess ballerina again.  I have a feeling those pants will be worn like tights under a "princess ballerina" dress.

I also saw something rather disturbing before we left the girl's clothing section.  There was an underwear display that I ran across full of thongs (not the shoe kind).  They started in the size below Sadie's size.  Does anyone else think that's totally insane?  She's three and they're selling thongs in her size?  At the rate Mae is growing they'll likely be in her size by the time she's two.  Do they actually sell those things?  Yuck.
Posted by Cammie Diane at 9:40 PM