In Search of a New Class... 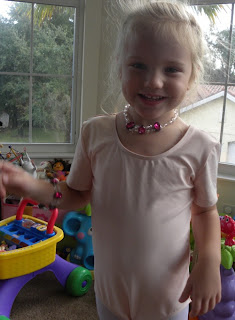 What a day.  I dropped Sadie and Paul off at the dance class and headed to Joann's Fabrics with Mae to take advantage of the super coupons I got last time I was there (purple velvet!  shiny silver!  green velvet! More holiday headcoverings on the way!).  When I got back Paul and Sadie were waiting outside.  Upon climbing into the car Paul said that when Sadie had come out of the class and he'd asked she'd said she had fun, but a little while later she'd said:  "I didn't have fun at dance class today.  I got in trouble."  In a very small voice.  Paul was a little suspicious because when the teacher had come out he'd been waiting to ask her a question, but she avoided eye contact and avoiding talking to him.

We've had dance related problems twice before today (today makes it three times in three months).  After a month of being gleefully happy about going to class the teacher had come out and said that Sadie was being wiggly, and she wanted to know what word I used to get her to hold still.  Two months in (last month) they'd called and said she had been better for a while, but was being wiggly again (this was around the time I was sick and in the hospital). The teacher agreed to bring Sadie out to me if there was a problem, for a short time out.  After that we started working again on "staying on her spot" and listening to the teacher.  Still, after the last conversation I'd just about had it. 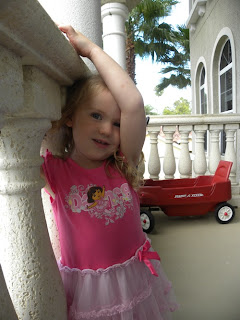 We'd picked the class because it was supposedly a fun, non-competitive class for 3 year olds.  The other three year old class in the area I looked at required an "audition" (I'm not kidding).  But now the teacher was making comments about how it wasn't important for her to be able to memorize the routine until after Christmas.

That made me really wonder about what the future expectations were going to be and whether they were even vaguely realistic.  In my 13 years of dance I never saw a 3 year old class perform on stage in a situation where a teacher wasn't off in the wings, showing them what they were supposed to be doing.  I'd seen plenty of very cute routines, but they were often cute because of the mistakes and the giggles and wiggles.

So... fast forward to this afternoon when Sadie and I went shopping.  While we were in the store I tried to get Sadie to tell me more (in the car she just looked sad and whispered and said she was in trouble and that class wasn't fun anymore).  Finally, after avoiding and telling me she wanted to lay down and that the teddy bears that were in the dairy aisle were soft, she spilled and started talking.  With her little arms crossed across her chest, looking down at the floor she began to answer my questions.  No, she hadn't been in time out.  She hadn't been running around.  She said she'd been listening.  And the teacher had yelled at her and she didn't know what she'd done.  She finished with what? what? what?  As we walked down another aisle she said that she didn't want to go back.  "Don't make me go back Mommy" was repeated at least twice down the freezer aisle.

I knew that there was obviously more to the story, but by the time we left the store I also knew that we wouldn't be sending her back to the class.  Sadie tends to be honest to a fault when asked about having done something wrong.  She confesses to pretty much everything.  I'll be in the kitchen cooking and she'll walk in and say: "Mommy, I pulled Mae Bae."

When I was talking to her it was pretty obvious that she had no idea why she'd been in trouble (I'm guessing that's a big part of why she was so upset, because when she's done something she usually confesses, apologizes and accepts being in trouble without a word of complaint). 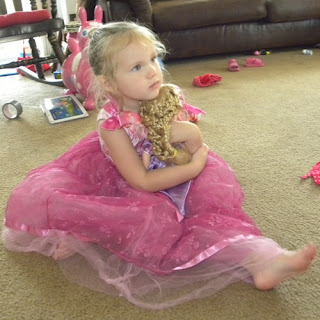 Paul called the school and left a message and a nervous sounding message was returned on his phone saying that when Sadie was sitting on the ground she'd been wiggling and kicking her legs in front of her and had kicked her neighbor and that they'd said "Sadie please keep your legs still out in front of you" but that that was all that had happened and that they were sorry she hadn't had fun.  When asked if she'd kicked anyone Sadie was adamant that she hadn't.  I can definitely see her bumping someone with her leg when she's wiggly.  But I also am pretty sure by the way she's acted pretty much all day that it was more than just a few words telling her to stop.  From what the teachers said she was talking to her about wiggling pretty much every week in October and Sadie was never phased by being told not to wiggle.

Paul called back and removed her from the class.  I'd really like to find a Mommy and Me class of some sort where the don't take the kids into another room and close all the doors and windows.  I'm hoping we'll find a place that understands that a three year old class is about fun and that three year olds tend to be a little wiggly.  And hopefully it will be a place where the teacher will come out and get me or Paul if there's a problem, instead of avoiding us after class.
Posted by Cammie Diane at 1:14 PM