Thoughts on Suffering and Comfort

I’ve been mulling over the concept of being “comfortable” and the concept of suffering after a recent online debate that I was involved in.  When I began learning about Catholicism, I’ll admit that the understanding of suffering was one of the first things that made sense to me.  I’d never really been exposed to the idea (or hadn’t been paying attention if I had) that suffering could bring us closer to God.  The concept that we could “offer up” our pain was also certainly quite foreign.

That’s why I’ve found it so disturbing over the past few years when I’ve read things that were written by other Catholics basically renouncing their belief in God because he “allowed” x horrible thing(s) to happen in their lives and if there was truly a God, he wouldn’t let it happen.  The idea of God as Santa Claus was certainly one that I struggled with in the past, although I’m not exactly sure where it came from.  I’d formed my own little belief of “if you’re good, God will protect you and good things will happen” that was bound to come crashing down by the time I reached adulthood.  And perhaps that’s why I find it so upsetting when I see others saying the same thing.

The debate I was in more recently involved the word “comfortable” and whether or not we are supposed to be “comfortable” in this life.  In the conversation I was having, any sort of hardship seemed to be labeled “bad,” with a life of comfort in this world being seen as the goal of our labors.  I’ll admit that I instinctively find something troubling about the thought.  Being comfortable and successful in this life isn’t supposed to be our goal.  Besides, when we’re comfortable we don’t often go out seeking God, because the word seems to imply that we’re happy where we are.  And I just don’t remember reading about many (any?) saints who were “comfortable” in this life.

The path to Sainthood isn’t supposed to be “comfortable.”  It requires heroic effort.  And the tragedy in this life won’t be we weren’t materially comfortable and happy with our careers.  The only tragedy would be not achieving sainthood. 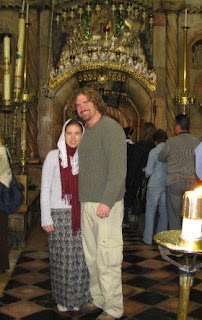 Apparently that idea is very, very offensive (as I was told many times in the conversation I was having).  The response I was given was that we are supposed to have comfort and be “happy” (because I’d pointed out that happiness in this life wasn’t something we’re promised) on earth.  And that there’s Nothing.  Wrong.  With. That.

There isn’t anything wrong with happiness.  But the “happiness” that we seek through material goods and earthly pleasures and our own accomplishments is nothing compared with the joy we might gain by striving to live out God’s plan for our lives.

Another idea I found somewhat off base was the idea that we know what will make us happy.  I think many of us can think of instances where it was the exact thing we least expected that brought us the most joy.  As much as we cling to our carefully crafted plans (and I am totally a list maker and a planner) what God has in mind to form our hearts and souls always seems to be infinitely better.

And often times we are formed by suffering, and specifically, our response to suffering.  We can become bitter.  We can cling to belongings and plans, which can increase our suffering, beyond what it needs to be.  Or we can turn towards God and say “not my will, but yours be done.”

It’s not easy.  I know it’s not.  That’s the prayer I found myself saying over and over again in the hospital in between “please save my baby… but not my will but yours be done… and if it’s your will that this baby be in heaven… then help me accept it…” a few months ago.

For me that acceptance and reliance on God did make the suffering bearable, particularly in the weeks that followed our loss.  I found myself comforted and very much felt God’s presence in a very tangible way in my life and throughout my prayers in those immediate days.  The condolences I received in the weeks that followed, especially when I managed to cling to my daily prayers, were there when God must have known that I most needed them, although I must admit that my prayer life is back to normal now, with my personal daily struggles of remembering to pray, or feeling sleeping, or being distracted.

God offers us comfort in this life.  He knows what we need and, if we turn to Him, will not allow us to be crushed under the weight of our sorrow.  But he doesn’t promise that we will be comfortable.  After all the gate wouldn’t be narrow (Matthew 7: 12-14) if this whole thing was supposed to be easy.
Posted by Cammie Diane at 8:19 AM