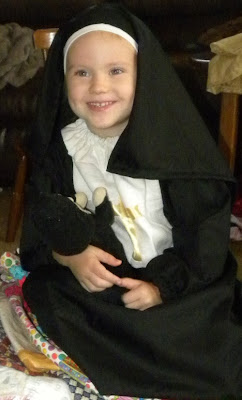 I ended up staying up late last night sewing Sadie's veil, but it wasn't quite (read: even close to) finished and so around 6:30 this morning I started in again, with her sitting next to me, wide eyed and ready to be a nun, while Mae was strapped into her high chair so she couldn't go after the sewing machine.

During a break in the sewing I made the mistake of asking Sadie a question about what she was going to be:

Me: "Are you going to be Saint Scholastica today?"  Okay I'll admit, we're going with Saint Scholastica, because I sewed her the Sister Scholastica dress to match her doll, which she had to have back before her birthday, and I just figured she'd go with it.  But at three, I really shouldn't assume anything anymore.
Sadie:  "I'm Marie Therese!"  Apparently Sadie and Saint Therese are on a first name basis.
Me:  "Don't you want to be Saint Scholastica?"  Very dumb question on my part, I'll admit...
Sadie:  "Marie Therese!  Where is my Marie Therese dress?"
Me:  "It's over here."  Picking up the Sister Scholastic dress.
Sadie:  "There it is!  Yay!  My Saint Therese dress!  Help me put it on."  At least she's not old enough to realize it's not brown...  or at least she hasn't yet....  the day is young!

I finished the veil and she's happily wearing it now.  She cried actual tears when she thought that the white part wasn't attached to the veil itself, while I quickly hand stitched in on.  In other news Mae is going as her namesake, Saint Margaret of Scotland and hasn't said a word in complaint!

Now to get ready for Mass, story time and the parade later today!  Happy All Saint's Day!
Posted by Cammie Diane at 8:08 AM