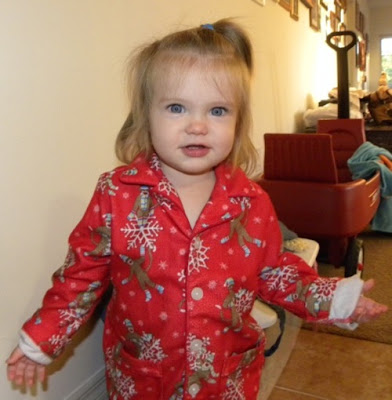 It's a moment that the ambitious gift making crafter knows well and this year it's come early in our house: the realization that there's no way you can meet your Christmas crafting goals, even if you work, 24 hours a day, 7 days a week for the next ___ days remaining until Christmas.

Maybe it's a breakthrough that the realization came earlier, rather than later this year, or maybe it was just my overly ambitious planning for what exactly would be home made (I was aiming at everything for a money saving change).

Usually the idea that I might not finish in time sets in around the 20th of December.  This year the inkling began at the end of October when I started thinking, "well if I knit a scarf today, and make an ornament every day, and I sew a dress tomorrow and, and, and..." followed by the realization that I haven't knit a scarf in a day since college, when I was a lifeguard and could knit by the side of the mostly empty pool I worked at all day long.  Next I started trying to think of ways around the whole time constraint issue:

Maybe I should go find some really bulky thread and some giant knitting needles?  Or a serger?  A serger might make things faster (at least in my fantasy world... having never actually used on in reality, I can be positive...).  Or I could go a little less ambitious on presents for the girls?  Was it really realistic to start studying the various ten/forts I've been seeing pop up lately in various catalogs?  I've never even built a tent? Even if I have some linen that would "just be perfect" is it really a realistic idea?

And yet, the fact that these very logical doubts have set in earlier this year hasn't deterred the planning, list making part of my brain that says: you can do it!  Add those cute little felt Christmas tree light banner things to the list!  Stay up an hour later!  Sleep after Christmas!

It probably doesn't help that most of these tasks are done sitting down... so technically I'm "resting" and not "overdoing..."  Yet as I stood in Joann's yesterday, with a mountain of felt, cut by the yard next to me, and a giant growing pile of sparkly tule being stacked on top of it even the other shoppers seemed skeptical.  "Are you going to finish all that by Christmas?" was the question of the day.

But Chrirstmas isn't the only day in question.  Will this set of items be finished by Advent?  Will these be done in time for the December-whatever- shipping deadline so it can make its way across the country?  Plus all those fun feast days in between I've been reading about?

I'm not quite yet ready to let those voices of reason rain on my parade.  Starting so early this year must be a step in the right direction?  And the idea that I might suddenly discover that I'm really a super-fast-sewer, although all evidence and hours spent at the sewing machine so far have pointed to the opposite, is still a dream I cling to.

Besides, it makes me feel a little less disgusted (or so I tell myself) when I realize that our local super stores actually started setting up their Christmas displays before Halloween (they were up, at least in part, last Sunday when we went by to pick up something for lunch after Mass).  I'll tell myself they're just motivating me to get a move on.  And maybe they can motivate me to limit how much we buy from their November stealing displays (what happened to Thanksgiving?!?!?!  Thanksgiving is one of my favorite holidays!!!!  And now we're going straight from Halloween decorations in September to clearance Christmas items in late October?!?!?!).

Anyone else have big holiday crafting plans your putting in to motion (or questioning!) at the moment?

Maybe the panic is starting so early this year because I'd really like to finish everything up before Advent.  That's a nice little dream.

I think I might be one step closer to meeting my goals if I could find a way to keep Mae Bae from swiping my thread spools and taking off with them every chance she gets!
Posted by Cammie Diane at 7:11 AM