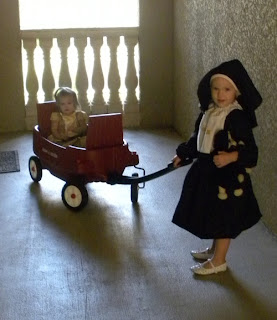 Today is a big feast day for our family.  Four years ago today I took about a half dozen pregnancy tests and laid them side by side as I realized that our lives were about to drastically change (and that I was about to spend nine very sickly days on a pilgrimage to the Holy Land, since I was already seven weeks pregnant when that realization occurred).  Two years ago today I took another pregnancy test, not realizing that it was the exact same day until I glanced at a calendar and realized that once more, we'd discovered that we were expecting on the feast of Saint Martin de Porres.

This year I didn't feel quite up to doing anything cutsie or tricky like last year.  I'm apparently not quite 100% (or 50%) post surgery now that I'm not taking percocet (even though that was only like 1 1/2 days anyways...), and I spent most of the day on the couch, wishing that no one would touch me and wondering if toddlers and preschoolers have a sixth sense about their moms feeling that way, that causes them to need to be on mom's lap. ALL.  DAY.  LONG.

I think my most frequent words of the day were probably:  "Could you guys just not be on me right now?" followed by: "I'm sorry Mommy's so grouchy today..." followed by Sadie melting my heart by saying: "How are you feeling Mommy?" and cuddling up to me.

I wouldn't mind everyone having to be on my lap all day at this point, if said little ones could be a little less wiggly and a lot less bouncy...  Mae's main goal of the day was to sit on my stomach and bounce up and down like she was riding a bouncy horse, while Sadie kept trying to pretend that I was a choo choo train.  I am definitely ready to be 100% (and to be feeling 100% less grumpy...).

I do have good news though.  In honor of our tradition on this particular feast day, I took a pregnancy test and it was finally negative.  It only took slightly less than three months and a D&C to get a completely negative result.  And while I'm a little sad that we aren't reliving our biennial baby-welcoming-celebration, I'm relieved to be getting closer to being back to normal.
Posted by Cammie Diane at 8:49 PM