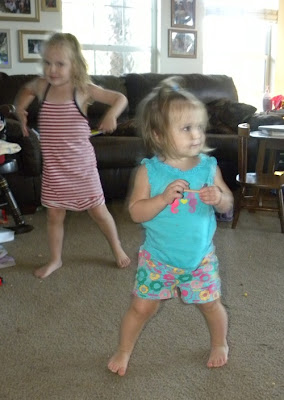 Mae Bae is in the midst of a "phase" and yesterday that phase was more evident than ever.  It began with a round of "She's touching me."  While the girls were sitting next to each other Sadie's foot barely touched Mae's (I think that's how it started) and Mae let out an indignant scream. At one point Sadie would have been concerned about the scream, but I think she's begun to take her sister's fussing with a grain of salt.

At bedtime Mae's antics increased.  Sadie brought over a Go Diego Go book and I read it to the girls.  They sat, staring at the book after it was over and when I said "okay I'll read it again" the words were met with big smiles.  But then the story was over.  Mae Bae handed it to me after I put it down, with an expectant look.  When I said: "No Mae, we've got to get your pajamas on" as I scooped her up, she let out a scream and threw her book on the floor.  Putting on her pajamas quickly deteriorated when she realized, after being fine with wearing Lightening McQueen PJs when I put them on, that her big sister was wearing a t-shirt with princess PJ bottoms.  This was apparently a great injustice that resulted in actual, rather than fake, tears (Mae must have worn hers more recently and they must be in the dirty clothes).

I have some idea how our little monster has been created (in addition to it being "the age").  When Mae Bae sees her sister with a toy that she wants she'll let out a cry.  And Sadie will run over and give her sister the toy, and laugh when she smiles at getting her way.  It's great that Sadie is so good at sharing.  Now if only Mae Bae could begin to learn to share her toys.  It doesn't work so well with her big sister wrapped around her little finger.  Maybe that's partially why Sadie's prayers are so persistent.  She's ready for Mae Bae to be a big sister.  This morning the first thing she told me when she woke up was that she was going to be the little sister today and that Mae Bae was the big sister.  I can't help but wonder if Mae Bae's antics have something to do with that statement!
Posted by Cammie Diane at 7:46 AM