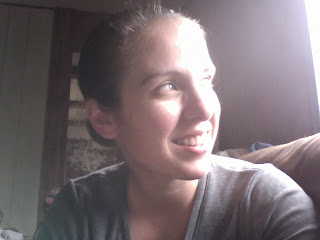 I keep forgetting to write my final post surgery update!

I went in for my post D&C appointment last Friday.  My recovery is right on track and everything seems to be going back to normal.

I have to say that every time I go in to my doctor's office I leave excited to have found a doctor that actually understands cycles, doesn't pressure me to do anything that I don't want to do, and doesn't look at me like I'm a crazy person who's claiming to have some secret knowledge that no one could possibly know when I mention any cycle related information.  During the miscarriage it got really old trying to explain to the doctors that I had really long cycles post partum after Mae (when they finally came back) and that I was fourteen weeks along, not sixteen weeks along because I knew when I ovulated.  There was lots of spluttering "You know what?!?! How!" that made me want to respond: "Seriously, you're a doctor!  This isn't rocket science!"

And it was a huge relief to have a doctor that had and idea of what was going on when I explained the following:

"I've been thinking about the last pregnancy a lot and I think I might have realized something.  Since I was a teenager I had migraines around the end of my cycle and the start of the next one.  As I've gotten older, the migraines got worse.  They were terrible during my pregnancies with Sadie and Mae.  And after Mae was born they increased and I started having an aura where half of my face and hands go numb and I slur my words.  They were happening all the time.  And then I found out that I was pregnant this last time and they stopped.  Completely.  Or almost completely.  I had one during the entire pregnancy.  At first I thought that was a good thing.  But the more I think about it the more I wonder whether the hormone that causes the migraines wasn't really there this time around."

She immediately understood and said the name of the hormone I'd been thinking was probably low and I left the office with a prescription for progesterone.

I have a feeling that most of the doctors I've seen in the past would have said: "Hmmm... Okay...  Do you want a prescription for The Pill?" if I'd told them that same story.

It's also nice to have a doctor who looks horrified when I told the story of how, with my pregnancy with Mae the doctor waited until an appointment when Paul wasn't with me (late in the pregnancy) to ask if I was sure I didn't want my tubes tied (at our "Catholic" hospital) when they did the c-section.  Because that's totally a decision I should be making when I'm hugely pregnant...  It just seems like a recipe for regret.

Anyways so I am still thrilled to have a doctor who actually understands hormones!

In other news Sadie continued her prayer campaign yesterday, asking God over and over again to send her a new baby sister and then occasionally coming over to whisper to my tummy before asking me if the "new baby" was in there yet.  She reminds me a bit of the parable of the widow and the judge...
Posted by Cammie Diane at 6:58 AM