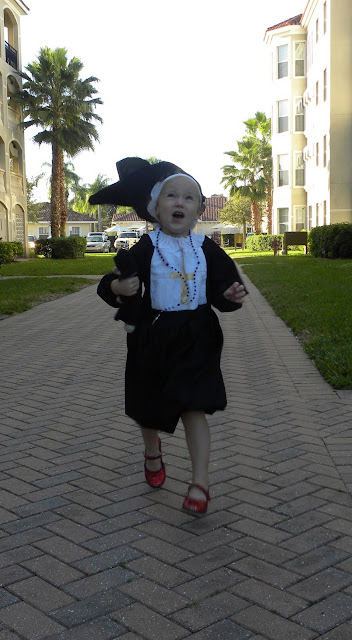 Sadie hasn't quite been herself lately.  At first I wondered if she was coming down with something, because she's usually only short tempered when she's getting sick.  After several days of healthy grumpiness I wasn't quite sure what was going on.

She usually runs around meeting new friends and introducing herself.  Today at play group she spent most of the time by herself in the sand box.  It was all very uncharacteristic.

Tonight she tackled me (I'd been an easy target, kneeling down after changing a diaper) and then ran across the room to get blanket.  She put the blanket down on me and gave me a kiss, then repeated herself, picking the blanket up, putting it back down and kissing me again.  She then announced that I was better.

I told her that I was happy, read her a bedtime story and put both girls in their beds.  A few seconds later Sadie said:  "I made you better.  Now your tummy is better.  Now you won't die."

Um.  What?  Quite a few thoughts went through my mind, first and foremost being: How does she even know what that means?!?!?!  I mean, we talked about the baby going to heaven to live with Jesus and Mary, but I don't even remember specifically using the word "die."

After reassuring her that I absolutely have no intention of going anywhere I asked her if that's what she's been worried about.  She very quickly said "Yes!" and then gave me several kisses.

Once Sadie and Mae were asleep I went out and called Nani.  And then we realized where she probably got the idea.  Her favorite movie.  The one she begged to watch today (I didn't let her) and would watch pretty much everyday if she were allowed to.  Therese.  Therese's mom dies in the first few minutes of the movie after being ill.  And Sadie's been very focused on me being sick... and very focused on insisting that she is Saint Therese (on a side note, she told Paul she was ready to go to the convent this afternoon).

Although it's not like we would have missed that whole theme if she'd been watching certain Disney movies.  I mean, think about Bambi and the Fox and the Hound...  but since she has been so upset about it I think I may hide her Therese movie for a while.  At least until I'm not the least bit sick and she's less focused on my health.

Hopefully she'll be back to normal now that we've talked about it!  The poor little bunny!
Posted by Cammie Diane at 8:46 PM