What a week!  All the orders that came in the weekend after Thanksgiving are shipped and on their way to their new homes!  And I'm hurriedly working to get out the new orders that have come in!

I have so many ideas at the moment, both for Sadie's Saints and for my other shops.  I just need to find the time to make them all!

At the moment Patrick is consistently sleeping from 7:30 until 11:30 each night, which gives me some time to work... but I have a feeling I'm going to have to start struggling past the 11:30 sleepiness if I'm going to get everything done that needs to be done before Christmas! 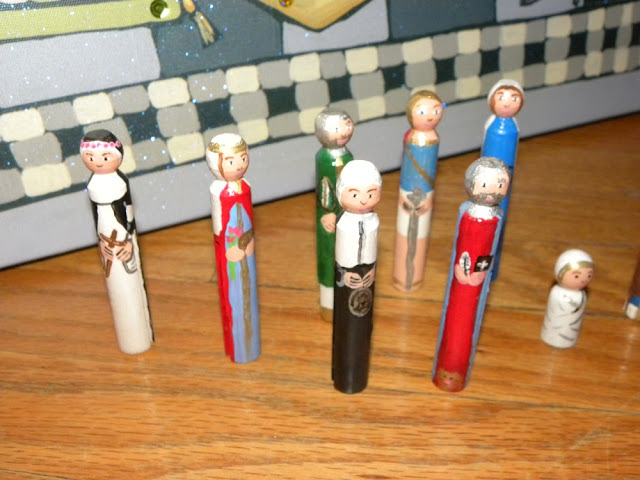 I have to admit to being a little amazed these days when I watch the girls playing.  They run and giggle and slam into things like bookshelves.  They wrestle on the ground, giggling hysterically.  Yesterday I hurried into the kitchen and made dinner (cheese quesadillas.... they didn't exactly take a long time) and came out to find the living room destroyed and Mae Bae with about eight scratches on her face looking like she'd been in a bar room brawl, with a huge smile on her face.

Sadie told me that Mae Bae "did it to herself."  When I passed this on to Paul he suggested that perhaps it happened like this:

Quick Take #2 is possibly the reason why Sadie and Mae both seem kind of tough in the classes they've been to.

Sadie is the only preschooler in ice skating that spectacularly crashes to the ice, turns to look at me in the stands while everyone holds their breath because the fall clearly hurt, and then smiles and bounces back up onto her skates.  There have been a lot of tears in her class (I'd say someone is crying 80% of the time), but having a sibling seems to have offered a bit of preparation that I never considered before having a two year old and a four year old who act like the time from 4 to 5 each night is some sort of professional wrestling match.

I received a packet in the mail the other day with all sorts of... helpful... information from our insurance company.  One little pamphlet was all about the evils of co-sleeping (somehow I could tell during our first pediatrician appointment that that was something to not mention at all if I wanted to avoid a lecture... even though Patrick does sleep in a special co-sleeper bassinet thing on the bed... I'm getting the impression this is a much more hostile area for that topic...).

Another pamphlet let me know that my insurance could help me keep this sort of thing from ever happening again.  Just in case I wasn't sure what caused all of these babies to keep showing up here.

This does bring to mind something I loved about the hospital I delivered Patrick at:  The nurses asked each time I was admitted if there was anything they should know about my religious beliefs and I explained that we're Catholic and won't be using contraception and that during my past post-labor experiences there'd been a big push with lots of "you know you're just going to get pregnant right away" type comments and that had made me really uncomfortable.  And guess what?  This time it wasn't an issue at all!

I appreciated that so much! 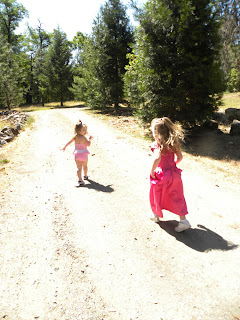 Which, in a round about way, reminds me of the man who rides his bike by me and the babies every day while we're out walking.  A few times he's been going in the opposite direction and he actually glares at us as long as he can see us.  He even turned his head to glare backwards at us while riding down the road.

And I would wonder "what his problem is" except that he greeted us when we first arrived here by screaming at us at a gas station (along with the other larger vehicles that were there) about "gas guzzling" and wasting the earth's resources.

The guy must ride up and down the main street here for a good portion of the day spreading his fury, because no matter what time we go I see him and his angry glare.

So I guess the glares are because I'm a breeder overpopulating the earth?  And because he seems to be more than a little crazy...

Every day Sadie asks to go to the Capital.  And every day I tell her that Mae Bae can't quite walk that far yet, but that she'll probably be able to by spring or summer.  And Sadie sighs and talks about going (one of these days, when finals are over, we'll have to drive over and let her walk around).

I'm especially glad we didn't make it there yesterday, however.  Because when the news came on last night it was all about the union protests going on and the people who were pepper sprayed there yesterday when things got out of hand...  So I guess we'll have to wait until that's over to let the girls get their first glimpse of state politics...

And after hardly seeing him for... a while... and not seeing any other grown ups... at all (if you discount doctors and clerks in check out lines)... for the past month...  I am especially ready to have a conversation in which the response to every single thing I say is not:  "why?"

I am beyond ready for finals to arrive and be done with!

For more Quick Takes, visit Conversion Diary!
Posted by Cammie Diane at 11:46 AM