We made it!  After approximately 16 hours of driving we arrived in Paul's hometown in Massachusetts, for the first time in three and a half years.

Is it weird that I really enjoy long road trips, even with three little ones in the car?

The fact that we've crossed the country so many times and spent so many days in the car means that they're used to long stretches of time in their car seats and hysterical giggling was the sound that came from the back seat more often than whining.

We would have made it yesterday (at about 1 am), except that our windshield wipers gave out halfway between Buffalo and Syracuse and with the mud and salt and ice and glare from headlights our only option was to take the next exit and hope that the storm was over in the morning (it was snowing when we stopped, although the snow wasn't the visibility problem).   This morning it was nice and we made a mad dash towards Boston and beat out the storm that we've heard is barreling down on us.

We're very thankful to be here, safe and sound.

15 hours into the drive Mae started very dramatically letting us know she was ready to be at Grandma's house (and we were so close that we didn't want to stop!).  I couldn't do much from my position in the front passenger's seat while we were on the turnpike, so I tossed a pack of fruit snacks back to her.  It landed in the crook of her right elbow.  She then "attempted" to pick up the fruit snacks with her right hand.

Now have you ever tried to touch your right elbow with your right hand?  It just can't be done.  Very over the top fussing ensued.  I turned around and refused to watch the antics (after saying "Mae Bae, use your other hand!  I can't come back there!  We're driving!") and when I looked back again the fruit snacks had magically disappeared.

The first one and a half quick takes were written yesterday... but as I fell asleep a couple times while typing them up (at 9 pm), so they've now become 7 Quick Takes Saturday night (this time at right around 10pm).  The question is, can I keep my eyes open tonight for long enough to finish them?

Paul just said:  "Oh look, Patrick's sleeping with his eyes open!  He must get that from you.  You sleep with your eyes open sometimes."

How'd that not get mentioned sometime in the past six plus years of marriage?

In the past three days I've had incredibly bad sewing luck that involved several sewing needles and my thumbs.  And I can now safely say that if you're ever having an unlucky day involving sewing needles do not offer to peel an orange for a young child in your care.  It is a terrible, horrible idea.

Mae Bae was having a tough day today.  Her tough day meant I ended up carrying her and her brother around several times... which is pretty much just barely something that I can do.  Paul snapped a picture while I was toting both of them around: 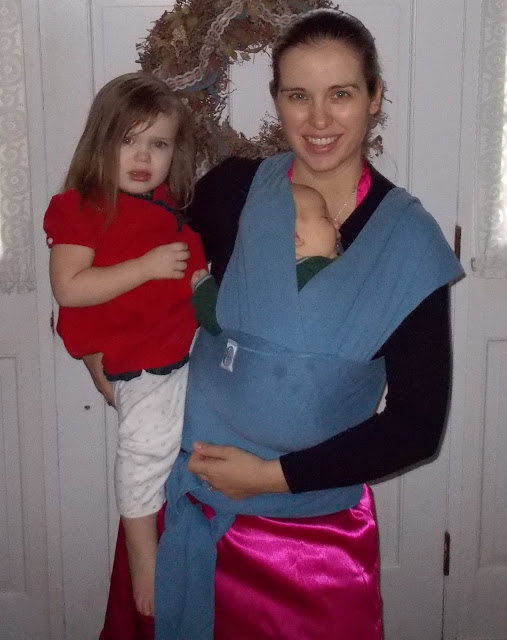 And then of course there's this picture... where I'm trying to stand in a natural-ish position while holding around 50 lbs of baby, only to realize upon seeing the resulting photo that that just isn't possible for me: 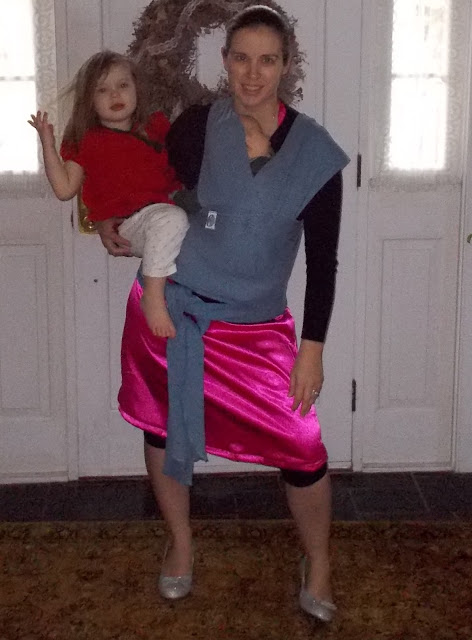 Now to quickly post this and get some sleep... my eyes are already starting to close again...