Sadie's Take on Justice and The Christmas Story

Last night after taking his first bath that was not filled with screaming, Patrick tried on a six month cotton sleeper (that hadn't yet been washed, which means it's going to get even smaller!) and it fit.  This makes me a little nervous about him fitting into the 3 month Christmas sleeper that the girls and I picked out for him when we were in Montana back in September, which I had planned on him wearing tonight and tomorrow morning.  I think he'll fit in fine weight wise... but his incredibly long legs just keep growing and Paul frowns on making him bend them to button the buttons on a sleeper, regardless of how cute said sleeper is.

Baby legs are bendy, I tell him.  They were like that for months in my tummy.

But he mutters something (okay, he doesn't mutter... he says it flat out while looking at me like I'm crazy for caring so much about a sleeper) about "stunting his growth" as if I'm suggesting foot binding instead of squeezing into a just-too-small sleeper.

Here's the latest picture of Patrick in his six month sleeper... at one and a half months old, insisting on taking after Daddy: 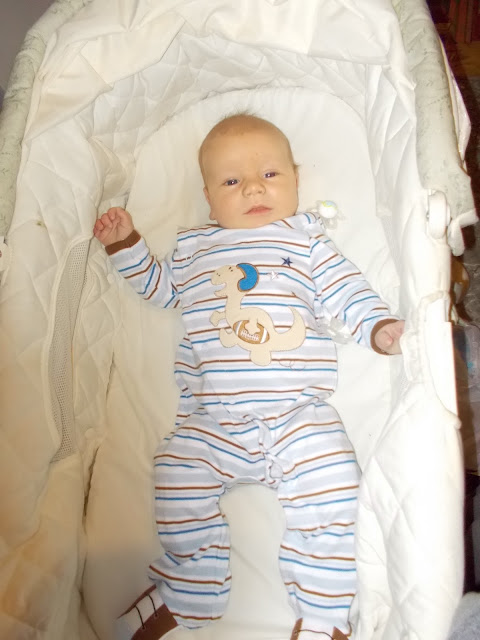 In totally unrelated news, Sadie has the same problem with the Christmas story that she had with the Easter story.

When Sadie heard the Easter story she immediately asked what happened to the people who crucified Jesus with a tone that suggested that she thought fire and brimstone raining down from the sky was the only appropriate response.  "No, he rose from the dead to offer forgiveness and salvation" just doesn't have the fairy tale justice that she was hoping for.

So when she hears the Christmas story what detail does she latch onto and begin peppering me with questions about?  Herod.  And the fact that he wanted to kill baby Jesus and that they had to flee to Egypt.

"I wish God would kill Herod."  She says shaking her head because this isn't the dramatic, dragon being slain with a sword type of ending she's longing for.
"When people are bad we don't want them to be killed."  I say, trying to think of a way to explain this.  "We hope that they realize what they've done is wrong and love God and repent, so that they can go to heaven too."
"Mommy, why would you want bad people to be saints and go to heaven?"  She says this as she fiddles with her little toy castle on a shelf, shaking her head as if I've completely lost it.
"Because it makes God sad when people are bad.  He wants us all to be good and love him so that we can live with him forever in heaven."

I don't go into praying that they repent for their own sake, because at the moment I think that might go over like a sack of bricks.  We'll build up to that.  She's already expressed disappointment that "Jesus doesn't have a sword and armor like Saint Michael" and explaining that he doesn't need a sword and armor isn't a popular idea with the four year old fairy tale loving crowd in this house.

Then again, she also warned me this morning that bunnies are "very dangerous" and "wild."

I can't wait to see what she comes up with before the day is done.
Posted by Cammie Diane at 10:40 AM