A School Day and A Doctor's Appointment 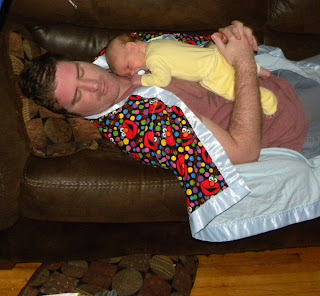 This is it.  We're in the home stretch.  It's finally finals week.  Paul has two finals and a paper left and then Christmas break.  He'll actually be home before 2 am each night.  And I will begin to get my house back into shape, because after a couple weeks of being by myself with the babies pretty much all the time it's a wreck.  I have no idea how single moms do it!  The sewing room looks like a fabric bomb exploded in it and it's begun spilling over into the rest of the house.

Today is Patrick's one month doctor's appointment.  I have a feeling he's grown quite a bit since we barely squeezed him into the yellow duck onsie that Sadie picked out for him before he was born.

And I've promised to begin teaching Sadie to knit.  Which happened in the midst of a conversation that went something like this:

Sadie:  "Why aren't we doing school today?"
Me:  "Because we did school four days this week, and we did it for over two hours a day, and I think that's more than enough for a two year old and a four year old."  (They're in love with "school" at the moment and Sadie has suggestions on what else we could be doing ["science!"], with Mae tagging along for the ride...)
Sadie: "But why won't you let me do school today?"
Me:  "Because you need a break."
Sadie:  "But why won't you do school and teach me how to knit today?"

I think she thought if she asked over and over again, in a heartbroken, how-could-you-do-this-to-me type of voice, I might cave in, set her down at the table and come up with a lesson plan.

Last night she reminded me that today I need to pull out the pink yarn and knitting needles because she's ready to learn.

This ought to be interesting at the very least.  And I really think I need to invest in some plastic knitting needles... because there's no way she's touching my rosewood needles, she'd snap the bamboo ones in about ten seconds, and the metal ones?  That just seems like setting us up for some sort of knitting needle sword fight impaling incident that will be sending some member of the family to the ER (and let's face it... we do not need another trip to the hospital since, between the nail through my foot, the mystery illness, childbirth and the catscan we've been to the hospital five times in the not-yet-five months since we moved here).

So here goes!  I'll post a little Patrick's trip to the doctor's office update later in the day if the girls let me get near my computer!
Posted by Cammie Diane at 8:09 AM